#Makeithappen: From a two-man team to 200, via Silicon Valley, San Francisco and Sydney, to discovering ‘the recipe for innovation’ 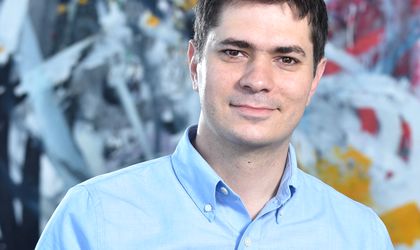 Created in 2007 by Ioan Iacob and Radu Constantinescu, Qualitance is today one of the major homegrown tech companies. Constantly working for the world’s biggest businesses, the company builds for its clients digital products and services that use emerging technologies, such as ML, blockchain, IoT. With 200 employees, an established presence on three continents (Bucharest, San Francisco and Sydney) and is looking to expand by next year to another European location.

Having sustained an average grown rate of around 60 percent in the past years, the Bucharest-headquartered company was chosen by the Financial Times as one of Europe’s Fastest Growing Companies in both 2017 and 2018. With a turnover of USD 10 million last year, up 34 percent year-on-year, Qualitance counts on a 20 percent turnover growth for this year.

Some of the company’s most recent projects include developing an esports platform backed by Adam Draper for San Francisco-based startup Ready Up, developing an app for the Let’s Do It! World organisation, and building a solution for real-time tracking and visualization of equipment and people (patients and personnel) in hospital areas for US-based start-up Intelligent Locations Inc.

With an innovation-driven business model, which, co-founder and CEO Ioan Iacob explains, was fine-tuned over the past decade, Qualitance is one of the few Romanian companies that managed to set a foothold in the Silicon Valley and acquire a US company. That is why, due to its ability to reinvent itself, attract top global consultants to its team and successfully channel market input into globally viable innovative tech solutions and products, Qualitance inspired us to tell their story.

According to co-founder Ioan Iacob, the idea to set up a technology business together with Radu Constantinescu started off from the realisation that technology was going to change things irreversibly. As he puts it – “We knew we were about to witness a change in the way business is conducted”.

“We could not put it into words then – it was more of a gut feeling – but when I held in my hand the first iPhone, it was a revelation. And we said now is the moment to do something,” he recalls.

When companies do soul-searching

For Qualitance, the path towards the current business model was a matter of trial and error. “As we started, our business model – one that later turned out to be wrong – was to do quality assurance”. The company’s first services, testing and quality control were being offered by the two founders. “It didn’t work as we imagined. That is why we went into development. In the beginning we did outsourcing, then we went into product development,” Iacob explains.

How diffcult was it to find the first clients? “It was very difficult,” the entrepreneur says. “The moment we started the company the two of us – and a third that joined us very soon after – we made a website and waited around for clients to call us. But nobody did. Then we figured out it is us who have to go after the clients,” he recalls his highly original method for pitching the company’s services to potential clients. “Back then, the only way knew how to do this was to answer job ads and show up at job interviews. And it worked, this is how we got our first clients. I simply told employers ‘I am not here as a potential employee’, but as a consultant, and ‘here’s what we can do for you’.

“It was perhaps a desperate move,” the entrepreneur says, “but we were not going to give up on the idea of building a company. Because, in reality – and not only in Romania – products, market clients don’t meet in a straightforward way,” he explains.

For Qualitance, things came together in the second year. “And our final identity – we found that two years ago,” Iacob explains.

For Qualitance, the key to unlocking success was meeting the right people along the way. “The company certainly experienced a few inflexion points”, Iacob says. “One of them is definitely the meeting with Radu Cautis, a Romanian-born American, whom we met in 2012 and who was our first major contact in Silicon Valley and the person who helped us set foot there. He gave us valuable advice on how to start this chapter in the company’s life.” An experienced medical and biotechnology executive, he became the first consultant for the company, and was followed by Robert Neivert, a 500 Startups partner. Although they did not come up with a recipe, the company’s working philosophy and exposure to innovation projects changed completely.

“Silicon Valley has been for years and continues to be the place on earth with the biggest concentration of tech solutions, innovation, knowhow for product building and for attracting funding from investors. It is also the place with most money on square meter right now in the Venture Capital and overall funding area,” Iacob notes.

“That is why, Silicon Valley remains for us a place where we get our energy from and where most of our clients are based. That is where we look to see what new companies and products are being created. Besides our clients, the most important resource we get from Silicon Valley is design and business knowhow,” he adds.

The second such moment, Iacob explains, was when Tom Chi joined the Qualitance Advisory Board. One of the co-founders of GoogleX, Chi has played a major role in projects with global reach such as Microsoft Outlook, Yahoo Search, alongside developing Yahoo’s Yahoo Answers from conception to a user base of 90 million. The addition to the team of the GoogleX co-founder and Google Glass VR glass prototype developer – who also advised on the user experience side for Google Cars and Project Loon brought a deeper commitment to innovation. Specifically, the company adopted the rapid prototyping as a way of work. Using rapid prototyping, the team brings the idea to prototype in two days, and within 10 weeks the prototype becomes a viable Minimum Product (MVP). “Ever since, our methodology has been based on the open source methodology at the Standford design school, such as rapid prototyping,” Iacob explains.

But perhaps the most important chapter, Iacob says, started after former ad man and advisor for Fortune 500 companies Mike Parsons joined the company. After the 2016 acquisition of LaunchPodium, the startup set up by Parsons in San Francisco, he became Qualitance’s Chief Innovation Officer (CIO) and is currently coordinating the innovation vertical and the activity of the US office. “That is when the innovation chapter really began at Qualitance,” Iacob notes. Specifically, Parsons’s entry into the company brought a transition from software development to innovative thinking through design thinking, centered on user experience and solving clients’ needs.

Pinning down the formula for innovation

According to Iacob, the business’ competitive advantage lies in the mix of services offered by Qualitance is unlike that of any other company currently on the market. “What we do is work with our clients to build products. And – while it may seem that every tech company is doing this – in reality that’s not the case. What we do is take on a strategic problem or a strategic opportunity on a certain market, transform a need or an opportunity into an idea and then we make that into a product. This is what innovation means,” he says.

“This is our definition of innovation: -to solve a major problem in a way that has never been done before and using emerging technologies. If you look at the figures, when it comes to the success rate of innovation products, in the area of new product, service development – it stands below 5 percent. The capability to have a recipe and implement that flawlessly with a 100 pct success rate is exceptional, something the industry does not have. And what we can do is to take one company from the problem to the execution phase,” Iacob explains.

In doing so, the company uses teams of around 20 people which, using the Skunk Works method developed as part of Lockheed Martin’s Advanced Development Programs (ADP), isolate a “small, hyper agile team that moves at a high speed to build the product or service,” Iacob says. The biggest contract they handled was valued at EUR 2.5 million.

OTP Group leverages the FLOWX.AI experience orchestration platform as a key asset to...

FLOWX.AI Partners with UiPath to Put the Power of Enterprise Automation behind Customer...