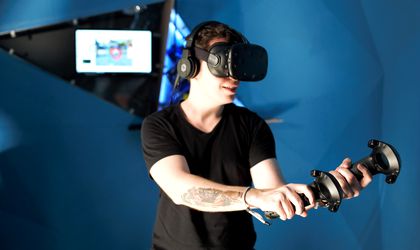 Our third #makeithappen business story is Gateway VR Studio, the location to try virtual reality in Bucharest, which opened back when there were just a few such studios across the world. Its vision for the future, its courage to dream big is what inspired us to share their story.

After spending close to a decade in the gaming industry, Andrei Stefan (30) wanted a new motivation and thought that the nascent Virtual Reality industry could provide a fresh challenge. In 2016, Stefan started the business on his own and was later joined by a colleague from his former job. Now, they are thinking about expanding their business on other markets. In hindsight, he says the first months in the business were the hardest, but he was able to break even in less than a year.

Andrei (pictured below) had been working for global gaming giant Electronic Arts for 8 years, and in the last year he had started to feel that he needed a fresh challenge. Although he graduated from law school, he was fascinated by the technology field and eventually went on his own in this industry. “This pushed me to start looking into ways to change something and find new professional challenges. I had been meaning to start my own business for a while and even saved up the necessary investment. I figured it was either to do that in Romania or go for complete change of scenery and find another job abroad. I decided to take a risk.  As I was spending more time inviting friends over to try the VR experiences instead of actually using it myself, I figured this would be a thrilling experience for many others as well and decided to open up a location just for this purpose,” says Andrei.

He thought of including the name Gateway in the name of the studio, as his business is a portal to virtual worlds. The VR experience has proven to be popular with all age groups and Andrei says that they “even had grandparents as visitors.”

To get the initial financing of EUR 25,000 for investments, Andrei tapped into his personal savings, and was also helped by his mother, while also getting a small bank loan.

“In August 2017 after about a year, Teodor, my partner and ex-colleague from EA joined in with another EUR 10,000 investment. Aside from that we’re making regular investments from the incoming revenue, new equipment or upgrades & a good deal goes towards marketing. I would say that additional investment goes up to another EUR 10,000 in the 2 years of activity,” he explains.

Finding the starting capital for his company was one of the toughest challenges, but more followed. He was creating a company in a field that was just being born at global level.

Asked how he found the location for the studio inside the building that also hosts Fabrica club, the entrepreneur says that he was kind of lucky.

“Fabrica was a stroke of luck, it was through a recommendation and they happened to have a perfect spot available for us, a bigger room which used to house an Escape Room business before. I started putting things on paper in May 2016 and by September we opened up. We wanted a location with an opening to public, it’s not too central but there is an eclectic & curious crowd visiting the location. Malls were also a consideration but with the rent & our space requirements it just wasn’t feasible,” he says.

“When we opened up Gateway there were only about 10 other locations like ours across the western world. Now that number has extended to hundreds, and if we look at China and Asian, thousands. There was no guidebook on how to get the word out and bring people in, and advertising for VR is not really a solution when no one knows what VR is. We found ourselves educating our customers and the general audience. Another challenge was keeping our nerves up through long months of losses and working at my day to keep the business a float. We reached operational break-even after about 9 months of activity,” he explains.

While it might cost you at least EUR 2,000 to get a quality VR experience at home (including a powerful computer and a headset), the prices for a visit at the studio are more accessible.

For instance, it costs RON 45 (roughly EUR 10) for 30 minutes of exploration in the virtual worlds. Groups can rent for whole studio for one hour at a price of RON 300 and there is even a subscription option for VR enthusiasts. The studio is mostly visited by children and young adults, although the entrepreneur had initially though that teen gamers would be the core audience.

In the past 2 years, the entrepreneur has branched out the activity of the studio and has created his portfolio of customers among event organizers, with BTL & PR Agencies and Event Brokers as well as a few big companies looking to advertise through VR and create new applications for its use.

Up to now, the studio has worked with up to 100 companies, mostly one-off contracts and recurring clients.

Speaking about his entrepreneurial plans, Andrei says he would like to work on Gateway for years to come.

“We do plan to open up a second area of business, developing our own software & experiences. Possibly a new company but closely tied to Gateway. We hope to access SUN funds for 2019,” he says.

More companies are discovering the VR experience and Andrei is optimistic about the outlook of the sector.

“The most interest we’ve seen so far is from FMCG, Real-Estate and surprisingly, banking. There is a strong inclination for companies to go digital and associate with emerging technology and VR has been one of the venues to promote that. However I believe the doors have just been opened and we’re likely to see a strong push from all industries as the application and potential use is far reaching. Another strong push is being made in Education, Medical appliances & Creative work, locally though, currently limited,” he explains.

The VR sector as a whole is still experimenting with hardware and new software solutions and with prices still high for the devices, the industry has yet to go mainstream.

Andrei says that however mobile & stand-alone headsets like the Oculus GO and Vive Focus are sure to push the sector further along faster than anything else.

“I do think in the next 5 years nearly everyone will own some sort of VR headset, it will be just like owning a smartphone in my opinion. Some industry statistics make it a USD 200 billion industry by 2022,” he says.

Looking ahead, Andrei is excited about the new devices that are getting on the market.

“I think 2018 will be a great year for VR and we’re seeing more and more people taking interest, mainstream media has also taken an interest (movies like Ready Player One or shows like Altered Carbon are great examples) and is pushing this forward, finally. Location based experience will be the place to experience what you cannot experience at home and we’re confident in the success of this business. Things like treadmills, haptic suits, warehouse-sized free roaming experience will only be available at specific locations and we hope to be at the forefront of this expansion,” he explains.

Andrei says there aren’t plans to expand outside of Bucharest yet, but his company is working on specific projects outside the capital.

This year, Gateway VR Studio is set to record revenues of EUR 200,000, running with a team of five and a few collaborators & freelancers.