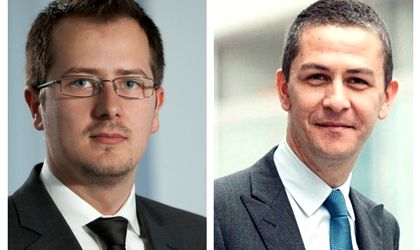 The deal will support the investments of Sameday Courier in technology, the network and the team. The transaction comes more than three months after the delivery firm delisted itself from the Bucharest Stock Exchange (BVB).

“We needed a new partner to help manage this fast development,” said Lucian Baltaru, CEO and shareholder of Sameday Courier (left in picture). With a new shareholder on board, the company will focus on developing its services in other industries such as banking and media&advertising, added Baltaru.

Octavian Badescu, the founder of Sameday Courier, explained that eMAG has the operational know-how and the pro-customer approach that the delivery firm had right from the start.

eMAG’s move in the delivery sector underpins the efforts of the retailer to keep up with the number of orders that grew by 50 percent year-on-year, said Iulian Stanciu, CEO of eMAG (right in picture). The retailer is working with a series of delivery firms in Romania.

Lucian Baltaru, CEO of Sameday Courier, will keep a 20 percent stake in the company, while Badescu marked his exit from the business. The delivery firm has over 1,000 large scale customers in Romania. Following the deal, Sameday Courier will continue to act as an independent firm within the group.

The delivery firm recorded a turnover close to EUR 3 million in 2016.