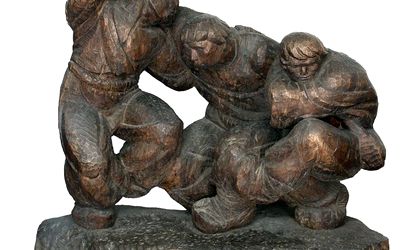 In the field of sculpture,Romania is known worldwide for Constantin Brancusi’s masterpieces. But another 22 local artists from the 20th century who have contributed to the country’s canon are now being marked in Bucharest. Some 75 of their wood sculptures from a period of almost 80 years are on display in a temporary exhibition, Sculptural Archetypes: Wood Sculpture, at the National Museum of Art of Romania. BR took a tour of this highly recommended exhibition of so many great artists’ pieces.

At the gallery, the public can see a chronological presentation of significant landmarks in the evolution of this artistic technique, created by Romanian sculptors during the 20th century. Pieces by artists and sculptors of the 1960s and 1970s feature in the exhibition, which balances classicizing modernism and radical forms of modernity.

Works from the National Gallery Collection from 1918 to 1999 are on show until October 28.