#Makeithappen: The story of Temperfield, the Romanian company aiming to save heart disease patients with a smart T-shirt that could call an ambulance for you 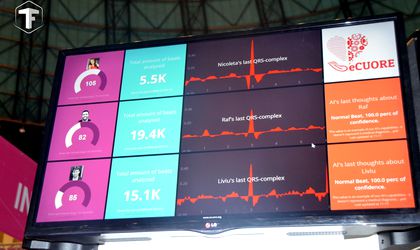 Business Review has launched a new campaign called #makeithappen. During the campaign, we are presenting inspirational entrepreneurial stories of Romanians who turned passion, hobbies and knowledge into successful businesses. We will present the stories of entrepreneurial initiatives of all sizes in all economic fields, underlining the diversity and creativity of the local business environment. Through this campaign, Business Review is strengthening its commitment to be the go-to source for inspiring stories of Romanian entrepreneurship.

Today’s story is about Temperfield, a IT company started by Romanian entrepreneur Calin Damian more than a decade ago.

“The main capital invested in Temperfield was represented by the IT expertise I previously accumulated in enterprise projects, both in the country and abroad. My competence and that of my colleagues (which we called ‘digital mastery’) in the field of modern technology and the efficient implementation for the digital transformation of companies, it becomes a strong capital for us in a difficult local entrepreneurship environment. Temperfield is the kind of company that financed itself from the profit of delivered projects, which grew from year to year in value and complexity,” he explains.

Read another #Makeithappen story here: After a 20-year career in IT, a Romanian entrepreneur made a business out of grinding cereal using an old-fashioned stone mill

The company is specialized in virtualization and private cloud and works as a partner in the digitalization journey of its customers.

Calin (40) founded the company in the field in which he graduated – the Faculty of Automatics and Computers at the Bucharest Politechnics Bucharest. Right from the beginning of the entrepreneurial venture, he had in mind the idea of giving back to the community and thought that technology had the power to bring major changes in the lives of regular people.

“I might say that I previously had initiatives in the social entrepreneurship out of my constant desire to have a positive impact in the environment I live in, for the ones surrounding me. (…) I want the projects that we work on to translate into improvements for the environment, be it on the professional level or in the society as a whole,” he explains.

Before creating Temperfield, Calin worked with NGOs such as LADO, ensuring the architecture, software implementation and training of operators for parallel counting of votes in elections. In the meantime, Calin and Temperfield are planning to solve a new major challenge that might help a lot of Romanians suffering from heart disease. This is how eCOURE came to life.

“Together with Liviu Chirila (which set the basis of the multinational team eCUORE), we decided that we wanted to demonstrate that the digital technology has to be developed and shared with the heart. And eCUORE is actually in the heart field. The eCUORE technology includes the monitorization of cardiac activity of persons with cardio-vascular disease through sensors, transmitting data in the cloud for realizing an EKG and analyzing the results through Artificial Intelligence algorithms,” says Calin.

Read another #Makeithappen story here: Good things do happen to those who wait! Gevalco, the company that paid its dues and now manufactures components for Airbus

The entrepreneur explains that the company aims to reach a prediction stage based on AI and even send alerts to emergency services that can help persons with serious heart disease.

Tempefield showcased the technology last year during IMWorld Fair in Bucharest. By fitting sensors on T-shirts, the company was able to track the heart beats of some of the participants that were interested about this technology. On the long run, the T-shirt could become even smarter, meaning that it could alert emergency services that the person wearing it has health problems.

Romania is already grappling with one of the highest rates of death due to cardio-vascular disease. Out of the 1.8 million deaths recorded due to hear issues in 2014, close to 150,000 were recorded in Romania, according to Eurostat, the statistics office of the European Union. This was one of the largest figures in the EU.

At present, Calin’s team is discussing with various partners the way in which eCoure can reach minimum viable product status and be integrated into existing medical services.

Moving back to the business side, Calin expects the company to generate a turnover of USD 1.3 million with eight employees.

The firm provides IT services for verticals such as telecom, retail and financial and works on custom projects with a high degree of complexity. Its portfolio of technical solutions includes VMware SDDC, SDN (Software Defined Networking), CMP (Cloud Management Platforms).

Temperfield is also targeting the segment of small and medium sized enterprises and has developed projects on virtualization and network security. One of the solutions that stands out is SQream, a technology that helps process 20 times more data with 100 times higher speeds with just 10 percent of the conventional costs.

Asked about the biggest challenge he faced as head of Temperfield, Calin mentions the retention of IT professionals and the management of finances in a balanced manner.

“I aim to identify, develop and create synergies with people that have what we call ‘digital mastery’, which means both exquisite competences for implementation, but also the digital transformer profile that can make the digital transformation clear for our customers,” says the entrepreneur.

He adds this is the reason why his company provides training to its customers on the tailored made solutions.

MI7 Plus, the Romanian financial start-up founded with Wall Street ambitions: “OK! Let’s build a product and sell it!”