#Makeithappen: Good things do happen to those who wait! Gevalco, the company that paid its dues and now manufactures components for Airbus 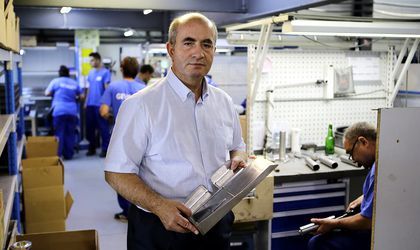 Today’s story is about Gevalco, a manufacturer of parts and components for the aviation industry. Founded by Costel Chira and two other partners in 1994 in Bucharest, the company barely survived in its first seven years, until it signed a partnership with a French company and started to become taste real success and development. Now, Gevalco supplies parts for aviation giants, including Airbus, and expects a EUR 9 million turnover in 2018.

The long path to success

Costel Chira, young an engineer in the early years of Romanian capitalism, finds himself out of job, after the state-owned company he had worked for since finishing college went bankrupt. Without any knowledge or example of how a private company would work, after years of communism that didn’t allow any kind of private ownership, Costel Chira and two other colleagues had to survive, so they started their own company. They used their families’ savings to buy some basic equipment. Upon examining the market, they noticed a need for consumables for a certain type of plasma cutting machines, as well as carbide tools, so they customized their machinery for these products and began production. Their main clients at the time were shipyards from Constanta, but Chira says they really had no chance of making a profit – “it was just about survival,” he recounts. After the first few years, the company hired nine other people. “We used to deliver our orders by train; a shipyard employee would take them, test them and give us feedback over the phone the next day. They paid half the price for the parts than they had initially paid to a foreign company,” Chira says.

“At that time, private meant you sold donuts or ice creams, no one was actually involved in production”

In 1998, the company applied for the first set of grants the Romanian state awarded to private companies. Their project was approved and they got enough money to be able to buy a new, modern piece of equipment – a CNC (computer numeric command) lathe – from Switzerland. “It took us two months just to learn how to turn it on. Nobody knew how to work with something like that,” the businessman recounts.

When the state shipyards were privatized in 2001-2002, Gevalco found itself without clients as the domestic industry had collapsed. Other state companies they tried to recruit as clients wouldn’t trust them because of the fact that they were a private company: “At that time, private meant you sold donuts or ice creams, no one was actually involved in production,” Chira says.

In 2003, the company’s luck changed when they signed a partnership with a French company, which had come across Gevalco through the Romanian-French Chamber of Commerce in Bucharest. They were looking for a company to make parts for the aviation industry and they presented a three-year plan to Gevalco, which at the time had a turnover of USD 40,000, which Chira says was just enough to survive. They accepted the deal and Nexteam group became a majority shareholder. “That’s when we started to develop. The capital was boosted up to USD 175,000,” Chira explains.

The French partners brought vision, a capitalist spirit and a new market, as well as modern equipment, money for a new space and more employees. Later, Gevalco also got its first bank loan from BCR – “The role of a bank is essential as it ensures the growth of a business,” the entrepreneur believes.

Gevalco, which manufactures over 600 different products, has made investments of over EUR 15 million in its production lines throughout the years and it has obtained the highest certifications in the aviation field. This year’s turnover is estimated at EUR 9 million, compared to EUR 8.2 million in 2017 and EUR 7.6 million in 2016. “This represents only added value, as the raw materials are acquired by the parent company, because there are certain restrictions in place in the aviation industry when it comes to materials we use,” Chira explains.

Half of the 200 current employees were recruited from nearby areas and were fully trained within the company. “Many of our employees have been with us for less than two years. The company is dealing with the lack of qualified workforce and the consequences of mass migration,” Chira says.

Gevalco is now in a continuous expansion of its production and looking to hire and train new employees. Also, according to its founder, since 2017, Gevalco got new high end clients from the aviation industry.