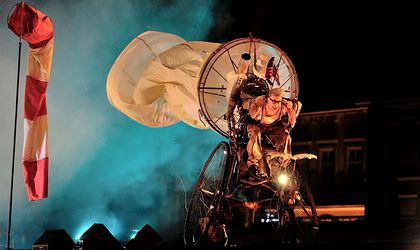 For the first 10 days at the beginning of summer, Sibiu becomes an enormous stage that opens a window to humanity in its most vibrant form. The 21st edition of the Sibiu International Theatre Festival will take place June 6 to 15 2014.

The festival establishes a meeting point that is unique in the world due to the diversity of the debated ideas and the energy of every representing country’s specific culture. The European commission has declared the Sibiu International Theatre Festival as “the third most important performing arts festival”, after the already famous festivals from Edinburgh and Avignon.

The organizers have put up for sale 20.000 tickets for the performances that will be presented this year during the festival in Sibiu. Prices vary between 10 to 40 RON, depending on the event and the location in the auditorium. The 21st edition of the International Theatre Festival in Sibiu will gather participants from 70 countries for 10 days who will present 350 shows in 66 venues, with an expected audience of 62,000 daily spectators.

Access at scheduled events within the International Theatre Festival in Sibiu is based on tickets issued by the Theatre Agency in Sibiu, 17 Nicolae Bălcescu Bld., (Monday to Friday between 11 a.m. and 6 p.m., Saturday between 11 a.m. and 3 p.m.). Tickets can also be bought from the national network of Domo, Germanos, Orange and Vodafone stores, and from Humanitas and Cărtureşti bookshops or online at www.eventim.ro. Entrance is free for outdoor events and special events (special conferences, play-readings and films).

Access to indoor performances will be allowed upon presenting a valid ticket per person at each show. The aforementioned ticket must be kept throughout the entire performance.

Tickets can not be booked for performances within the Festival, a place in the auditorium is guaranteed only by buying the ticket. The International Theatre Festival in Sibiu accepts payment in cash, credit card (Visa Maestro and Mastercard) and by payment order.

Entering in the performance hall after the the starting time of the event as mentioned on the ticked will not be allowed. Failure to show up in time at the event renders the ticket invalid without the right of reimbursement or use in another performance.

It is forbidden to use mobile phones, cameras and video or audio recording devices throughout the performance of indoor events.

In case of illness of an actor or force majeure, the organizers have the right to make changes in the program of the performances and sold tickets can be refunded or renewed for another performance. Amounts resulting from additional costs (transportation, hotel, courier, bank charges etc.) will not be covered by the organizer.

The program of the International Theatre Festival in Sibiu may be subject to changes and updates.

The updated version of the program is available on www.sibfest.ro.