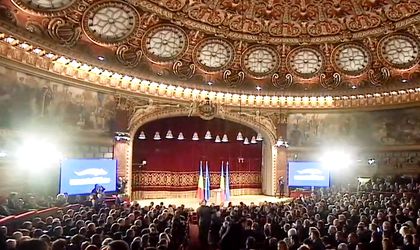 The ceremony marking Romania’s takeover of the Presidency of the Council of the European Union took place at the Romanian Athenaeum. Many Romanian and European officials were present at the ceremony, while a few hundred people are protesting outside the building against corruption at the government and Parliament level, as well as showing their support for the European Union.

It is a time of emotion, because today I have the honor of speaking on behalf of my fellow citizens, of Romania, who for six months will stand dignified at the table where European decisions are taken.

I see today that some of the architects of our European integration are here. I sincerely thank them for their contribution. Looking back, I think the most important step was when the Romanian people adopted by referendum the current constitution of Romania. Then there was the act of the people’s will to align themselves and to assimilate the EU’s values.

The constitution adopted at that time is the strongest guarantee that our country has embarked on the irreversible path of European integration. The Constitution was drafted in agreement with our European partners.

This constitution tells us today that the government has a duty to manage European files during the presidency. I take honor and dignity with this high responsibility in front of Europe.

We will demonstrate that Romania deserves respect for the European community and European partner status, that it is fully prepared to stand upstairs with the other Member States.

I want to tell the European partners that the Romanians have been, are and will remain a pro-European people.

We want to be equal partners and respected, and now that Romania is sitting at the table where the future of the EU is being discussed and decided. We want Romania to enjoy the same benefits that this grand project of a strong and united Europe offers.

I guarantee you that ministers will seriously manage the vital dossiers for the present and the future of the EU.

The European path has been and remains our choice.

Your musicians, painters, poets are among the greatest intellectuals of our continent. I admire your intellectual and cultural life, which has always been strong.

So far, I remain proud to have signed the Treaty of Accession of Romania. It was a difficult and often demanding road. We must welcome the extraordinary performance of Romania, which has remained attached to our common values, which we must respect every moment.

The EU is made up of compromises, but when it comes to people’s rights, the rule of law, the fight against corruption, no compromises are possible. The EU would not be complete without Romania and Romania’s natural place is also in the Schengen area.

Romania takes over the EU presidency at a crucial moment. I count on the energy and unity of the entire Romanian nation in order to decide what we have to do and what we can do in the coming months.

UPDATE: Donald Tusk speech (he told the speech in Romanian)

I’m sure your presidency will be as energetic, Romanian and European as George Enescu’s music. I say it because I know how robust and creative is the Romanian nation. You will be the hosts of Europe and I am convinced that you will act in the spirit of the proverb the man sanctifies the place.

In this fast-paced world where the future will surprise us every day compliance with rules and values ​​is essential. It is largely up to now whether Romania and how Europe will overcome the challenges of the future.

It is only up to you whether your policy will be a good example for Europe or a severe warning. Those who imagine they can find shortcuts tell them they’re wrong.

Romania has the power to fascinate and delight. In my family the first car was my father-in-law Dacia 1310. Today, my son’s father-in-law drives a Dacia Duster.

I would like to appeal to all Romanians, to defend the foundations of our political civilization, freedom, integrity, respect for the truth in public life, the rule of law and the Constitution, as Helmuth Duckadam defended four times in a row.

I assure you of all my support.

The parliamentary majority will support the government in all its actions to fulfill its mandate with dignity and honor. Despite the comments to be seen in the key, I assure you of a pro-European conviction

I cannot imagine Romania outside the Union. Romania is a country you can rely on and I think my country deserves to be respected in this ambitious EU project.

In Bucharest, it is the very clear political will for Romania to fulfill its mandate. I have treated with all seriousness the recommendations to ensure political consensus during the presidency.

We need to understand the electoral context in which we are. Romania will have presidential elections next year for parliament.

The parliamentary majority has the wisdom to support the government.

”Twelve years after joining the European Union, Romania takes on a leading role at European level. Looking back a little, the return of our country to the European family has been a desideratum of special importance, for which we have made every effort at national level and for which we have worked with dedication and professionalism, firmly convinced that the European project is a unique construction in the world of peace and prosperity and the only way to ensure the common progress of the European states.

Today, with the same conviction, we take over the presidency of the Council of the European Union, with the primary objective of contributing to the consolidation of a more cohesive, more united and stronger Europe. The first semester of 2019 will be defining the future dynamics of the European Union. The Union is currently facing various challenges, both internal and external, such as Britain’s withdrawal from the Union, migration and security in its immediate neighborhood and beyond the European continent.

The construction of the European Union today was possible because the founding fathers believed in the European project, in its ideals and values. We believe today, more than ever, that the European Union is undeniably a successful, powerful and viable project. The over 60 years of peace enjoyed by most of our continent testify to the strength, the fear and the trust of all in our ability to cooperate effectively and sustainably. They are proof that “united in diversity” is not a mere motto, but the expression of the fact that our Union is a perennial project capable of remodeling itself without abandoning founding principles and values.

As an integral part of this European community, Romania now has the mission to advance our common agenda. We all know that the exercise of a Presidency is a mission of high responsibility, which involves both commitment and pragmatism to be able to respond in a concrete, appropriate and realistic way to all challenges.

More unity and cohesion – this is the way we are proposing for the next six months, and we will have to pursue it all with consistency. We have a number of important dossiers on the European agenda, such as the negotiations on the future Multiannual Financial Framework post 2020, and the context of the Romanian Presidency will be marked by the elections for the future European Parliament. On this background, we will have to demonstrate that by unity and consensus we can define a new page of our common project.

We need more cohesion in all our actions at the level of the European Union, whether we are talking about a Europe of convergence, a safer Europe, an increase in Europe’s role as a global actor or our common values. Cohesion is, in our view, an essential aspect to ensure the advancement of the European project.

During our presidency of the Council of the European Union there will be remarkable moments for the evolution of the European Union and we are confident that meetings of special significance, such as the Sibiu Summit, will offer new prospects for tomorrow’s Europe. I express my wish and hope that May 9, 2019 will remain in the history of the European project as a moment of reaffirming the narrative of a strong and united Union.”

President Klaus Iohannis announced that he will attend the events at the Romanian Athenaeum dedicated to the taking over of the EU Council Presidency by Romania.

Florin Iordache will support the speech as representative of the Chamber of Deputies, the president of this legislative body, Liviu Dragnea, being on leave.

The rotating presidency of the EU Council taken over by Romania will start on Thursday with an opening ceremony and an inaugural concert at the Romanian Athenaeum. Opening speeches will be held by Prime Minister Viorica Dancila, EP President Antonio Tajani, European Council President Donald Tusk and European Commission President Jean-Claude Juncker.

Also, on Friday, Jean-Claude Juncker will hold bilateral meetings with President Klaus Iohannis and then with Prime Minister Viorica Dancila, according to a communiqué from the European Commission Representation. The two meetings will be followed by press conferences.

EC President Jean-Claude Juncker paid a visit to Bucharest on January 10-11, when the Romanian Presidency of the EU Council officially started.

President Klaus Iohannis, Senator Calin Popescu Tariceanu and Florin Iordache, Deputy Speaker of the Chamber of Deputies, will give speeches at the Romanian Athenaeum at the opening ceremony of the Romanian Presidency to the Council of the EU.