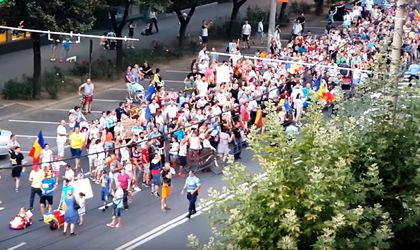 Tens of thousands of people participated in anti-government protests organized on Saturday evening in all major cities. Over 10,000 people were on the streets in Iasi, another 8,000 in Timisoara , over 5,000 in Sibiu and around 3,000 in Cluj-Napoca.

In Iasi, approximately 10,000 people joined the protest against the current government. As in the previous evening, most of the demonstrators met in Unirii Square near the statue of Alexandru Ioan Cuza. Men, women with children in their arms, or young men and elders, came with flags or flutes, chanted slogans, and then took part in the march on the important streets in downtown Iasi.

Although the demonstrators said they were angry because of the previous day incidents in Bucharest, the protest in Iasi was a peaceful one.

The protest in Timisoara took place on Saturday night, with abouthad around 8,000 people and ended at 23:00. At the official closing of the rally, there were more than 1,000 people in Opera Square.

In Sibiu, there were more than 5,000 protesters who marched for four hours on the main boulevards in the city, after which they went to the HQ of the PSD county organization, demanding the resignation of the Government and Liviu Dragnea.

Among the participants there were members of the PNL and USR organizations, and the leader of the Liberals of Sibiu, deputy Raluca Turcan.

The demonstration stopped in front of President Klaus Iohannis’ house, where they applauded and chanted ”Iohannis don’t forget, Sibiu is on your side”.

The same amount of people filled Brasov‘s main boulevards, protesting against the PSD-ALDE coalition and the government. At the peak of the protest action, about 4,000 people marched on the street. If on Friday evening the protesters went to Sfatul Piata, after which they crossed several boulevards in the city until 23.30, on Saturday they chose another route, respectively Bucharest Boulevard-Uranus boulevard-Saturn-street Zizin-Prefecture-Council Square.

”Bucharest do not forget, Brasov is on your side,” chanted the demonstrators.

Approximately 3,000 people protested in Cluj Napoca, the demonstration ending around 23,15, after the protesters, who blocked the intersection for three hours in front of the Prefecture, returned to Unirii Square. During the protest, there were no incidents or collisions with the gendarmes, the demonstrators liberating the intersection to let two ambulances pass.

More than 3,000 people showed on Saturday evening in the smaller city of Baia Mare. They initially gathered in the Revolution Square, where for almost an hour they spoke fiercely about the situation created by the current government, but also about the corruption in the local government and the fact that thousands of people in the city were forced to go to work abroad.

From the Revolutionary Market, the protesters went on a march through the central area of ​​Baia Mare, during which they shouted anti-PSD and anti-government slogans using vuvuzes and whistles. Numerous tourists from Banat, Dobrogea and Brasov were present at the march.

Around 30,000 to 50,000 people protested in the country, a number almost equal with the number of protesters in Bucharest, all asking for the demise of the government an criticizing some public figures like Liviu Dragnea, Interior Minister Carmen Dan, or PM Viorica Dancila.