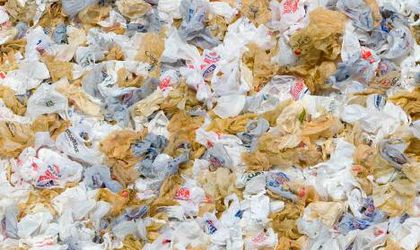 Pressured by the law stating that plastic carrier bags will be banned both from being introduced on the national market (from 1 July 2018) and from marketing (January 1, 2019), retailers in Romania are starting to comply with the demands of the legislation.

After Carrefour and Mega Image both recently announced they would replace plastic bags with biodegradable ones,  Kaufland has gone further, having launched an anti-plastic strategy in its hypermarket on Barbu Vacarescu Street in Bucharest.

According to the company, Kaufland Barbu Vacarescu is the first in the group’s entire international network to implement such major changes.

Among the changes taking place in this store is the replacement of consumables: over 90 percent of disposable plastic materials have been removed and replaced with 100 percent biodegradable or compostable, environmentally-friendly materials.

For the first time, the Kaufland Grill service is 100 percent plastic-free, so all packaging and consumables (bags, cutlery, casserole, trays, etc.) are made of biodegradable materials. Thus, the cost assumed by Kaufland Romania so that the consumables used in its store to be sustainable (biodegradable and compostable) is four times higher, reaching to about EUR 300,000 per year.

Bags made of biodegradable materials were introduced at the cash registers. Moreover, for customers who want to adopt an environmentally-friendly lifestyle, Kaufland has listed several new disposable items made from 100 percent biodegradable or compostable, environmentally-friendly materials as an alternative to plastic. These include straws, plates, knives and forks, glasses and bowls.

The company has also installed bio-waste bins where customers can dispose of biodegradable waste or for further composting. They prevent an unwanted decomposition processes, allow for impeccable air circulation and have anti-bacterial properties.

Finally, Kaufland’s parking lot now features a self-service recycling infrastructure, with special machines for three types of packaging, including plastic. Here, customers can recycle PET (up to 3 liters), glass and aluminum doses (up to 1 liter) and receive a rebate coupon that can be used in the store.

The three objectives of the move

The initiative has three objectives: avoiding plastic consumption, improving the recyclability of materials and encouraging the adoption of sustainable packaging.

Moreover, Kaufland aims to attract the partners in the store’s shopping gallery for the first time in order to reduce the amount of disposable plastic used. Currently, the Stradale restaurant is the first to join this initiative and will remove dishes, glasses and disposable plastic cutlery, replaced with stainless steel arcopal dishes and cutlery, and others will explore this possibility.

Kaufland Barbu Vacarescu from Romania is the first in the group’s entire international network where the company is implementing major changes. This is just a first step for the company, and other measures will be implemented gradually.

Since the elimination of plastic is a stringent subject, the initiative of the first store in Romania with an anti-plastic strategy comes less than three months after Kaufland announced new measures to reduce the amount of plastic.

In the future, Kaufland will reduce plastic consumption in all countries by at least 20 percent until 2025 and will ensure the 100 percent recyclability of plastic packaging used for its own brands. Also, by the end of 2019, other special recycling machines will be installed in Kaufland’s Romania network.

Giving up on microplastics

Moreover, Kaufland does not use microplastics in brand formulas – such as, for example, cosmetics, personal hygiene or home care and cleaning. The decision to avoid plastic microparticles has been undertaken internationally since 2013, alongside efforts to help protect the environment.

The company has collaborated with its partners to find ecological alternatives as a result of the exclusion of plastic microparticles (PE, PP, PA, PET, PES, PI, PUR), so one example is the use of oil in this peeling hardened castor.

Plastic packaging waste is a global concern. By 2015, mankind had produced 6.3 billion tonnes of plastic waste. 79 percent of it got into the environment, polluting nature and oceans.

If the planet maintains this pace for producing and using plastic, by 2050 we will have 12 billion tonnes of plastic waste in the environment. The impact of plastic pollution is a real threat to the future of the planet. That is why we need to take action quickly, especially regarding disposable plastic packaging, which has a short life span and are highly polluting.

”Sustainability is an integral part of the company’s DNA, which makes all decisions carefully weighing the impact on the environment, the communities in which it operates, the supply chain, customers and employees. Environmental protection is an extremely important issue for Kaufland. More than 47,000 tonnes of waste were recycled by the company in a year: plastic, packaging, batteries, cooking oil and others, according to data released in the latest Kaufland Sustainability Report,” says Valer Hancas, Kaufland Communications & Corporate Affairs Director Romania.

In March 2018, the European Commission proposed a new law that banned or restricted the 10 single-use plastic products most often found on Europe’s beaches and in its seas. The move comes amid efforts by the U.K. and by U.S. jurisdictions such as California to also limit single-use plastics.

The products on the EU’s ban list include cotton swab shafts, cutlery, plates, straws, drinks stirrers, and sticks for balloons. They will need to be made with more sustainable materials. Single-use plastic drink containers will be allowed only if their caps remain attached. Other products are subject to awareness-raising and cleanup measures. Together with fishing gear, the products targeted constitute 70% of all marine litter, the EC says.

Under the law, plastics producers will be obliged to help cover the cost of waste management and cleanup and to promote litter awareness. Producers of fishing gear, for example, will be required to pay for the collection and treatment of waste gathered by port authorities. The EC says it will provide industry with incentives to develop less-polluting alternatives.

“Europeans need to act together to tackle this problem, because plastic waste ends up in our air, our soil, our oceans and in our food,” says Frans Timmermans, the EC’s first vice president responsible for sustainable development. The EC is pushing to approve the measures by May 2019.

PlasticsEurope, Europe’s leading plastics industry association, hit back at the proposal. “Plastic product bans are not the solution,” it says. The association is urging the EC “not to take shortcuts” and warns that alternatives to plastics may not be more sustainable. Rather than plastics, PlasticsEurope blames the problem on a lack of waste management infrastructure and “inappropriate littering behavior.”

But the proposed legislation was welcomed by environmental organizations, including the European Environment Bureau, a network of groups. “There is no reason why we shouldn’t ban unnecessary single-use plastic items when durable and toxic-free alternatives already exist,” says Stéphane Arditi, the group’s products and waste policy manager.

Biobased plastics producers could benefit from the proposed law. “Bioplastics can offer sustainable and safe alternatives for some of these identified products,” says François de Bie, chair of European Bioplastics, an industry association. However, the proposed law remains vague regarding the use of alternatives, he says.