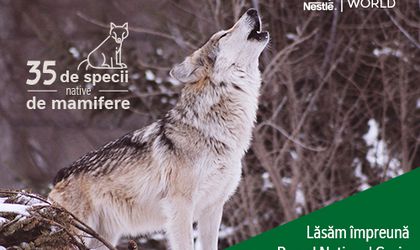 As part of the POPAS 2020 project, Nestlé Romania launches the first biodiversity study for Cozia National Park, focusing on green areas a year ago, when more than 500 Nestlé volunteers, the Park administration and members of the local community collected more than 40 tons of waste, sent for recycling or recovery. There is also a planting of 30,000 acacia saplings in the same project, which will neutralize a total of more than 200,000 tons of carbon dioxide by 2050. The saplings, planted on an area of 20 hectares, will help expand the feeding area for bees, promote pollination of native species, as well as vegetative remediation of soil in certain areas of the park.

Launched under the umbrella of the Sustainability Pillar “Nestlé for a Waste Free world”, the biodiversity report produced by a team of environmental and environmental engineers led by Msc. Ing. Valentin Dragomir, General Manager, Managerdemediu.ro, complements the greening actions of previous years. It contains a presentation of the park, a section dedicated to the threat posed by waste, the conservation measures of Cozia National Park, but especially how the habitats in the park were preserved as a result of the greening action carried out last year.

“We aim to reduce the environmental impact in protected areas and buffer zones within Cozia National Park by implementing annual environmental actions, greening and planting of saplings in areas that have undergone impact transformations in previous years”, says Vali Dragomir, Managing Director Managerdemediu.ro.

Acacia saplings have been specially chosen both to meet the needs of the soil in the targeted areas, which need vegetative remediation, but also to support the activity of honey in the area, with beekeepers able to develop their businesses with about 80 bee families that will produce more than 35 tons of honey for the local community by 2050.

“Within Cozia National Park there is a real national wealth, where we can find among other things: 75 species of plants (some of them unique in Europe), 20 protected natural habitats, 122 species of invertebrates, 14 species of fish, 25 species of amphibians and reptiles, 35 species of mammals and 164 species of birds (of which 69 are of conservation interest). Equally, we see identified in the report waste from plastics, plastic packaging, paper, wood etc. All this has an impact on the flora, fauna, but also on the flowing waters” says Ing. Pavel Prundurel, Director of Cozia National Park.

Specialists also propose a number of conservation measures, such as: establishing a waste disposal system in the park and making anti-bear bins to avoid attracting wild animals and their dependence on household waste. The Administration of Cozia National Park has considered partnerships with local public authorities, landowners and managers.

“With climate change having a major global impact and a threat that requires urgent action, we have begun accelerating sustainability efforts by implementing projects to support the global commitment to net zero emissions by 2050, the transition to 100% renewable energy, and the development of alternative packaging. In order to have zero impact on the environment in our operations by 2030, we are implementing actions to protect biodiversity and natural resources and implementing awareness campaigns aimed at bringing to the fore the need to work together between companies, authorities and society to keep the environment a free and clean place”, says Irina SIMINECO, Corporate Affairs Manager Nestlé Romania.

Nestlé addresses the issue of packaging waste in all the communities in which it operates all over the world, and bases its strategy of working on three pillars: developing new packaging, shaping a waste-free future and awareness campaigns. The company is carrying out a number of actions to transform its packaging into 100% recyclable or reusable packaging and to reduce the use of new plastics by a third by 2025. Researchers at the Nestlé Institute of Packaging Sciences, the world’s leading institute in the food industry, are also developing innovative solutions for the packaging of more than 2,000 Nestlé brands globally.

Nestlé’s sustainability campaigns are tailored to the needs of local communities, from pilot recycling projects for 100,000 families in Australia, to developing a program with Project Stop for communities in Indonesia, or developing greening actions in over 66 locations with 5,000 Nestlé employees on World Oceans Day 2019.