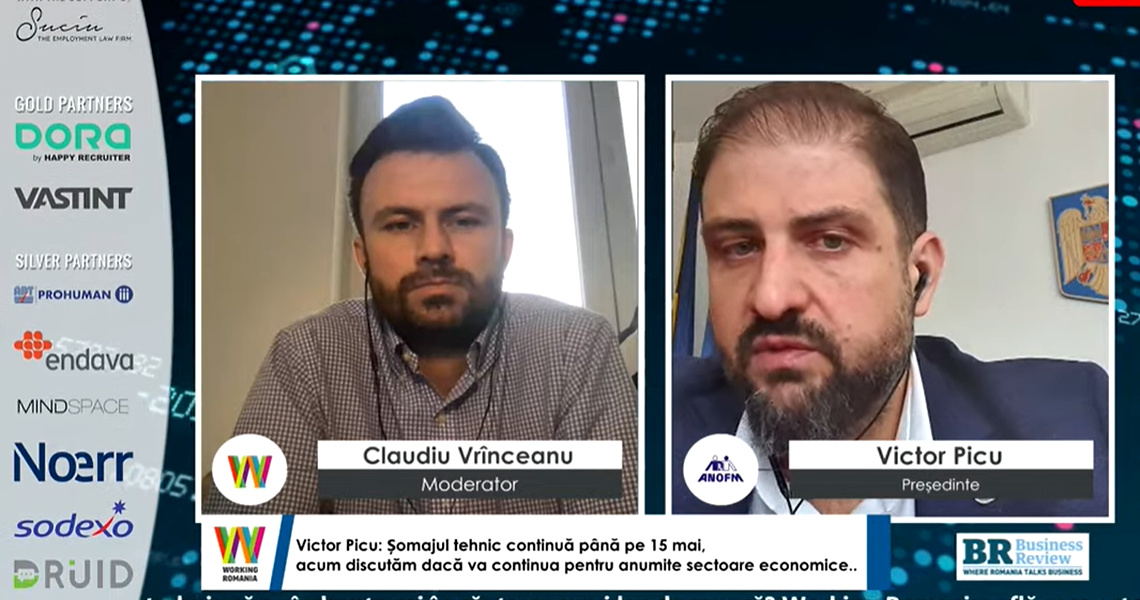 Working Romania, Business Review’s HR conference, was opened yesterday by a one-on-one talk between Victor Picu, President of ANOFM, and Claudiu Vrinceanu, the moderator of the event.

Before the crisis, the National Agency for Employment (ANOFM) started a program for modernization, trying to eliminate the bureaucracy at least partially. But, as the pandemic hit the country, the Agency was forced to come to the aid of the companies affected by the state of emergency, as Victor Picu, President of the National Agency for Employment, said at Business Review’s Working Romania event.

”All state institutions are lagging behind in the digitalization area. In the first month of our mandate we started to modify the application norms of the ANOFM regulations and we wanted to continue on the digitization area,” said Picu. ” We are also working on an online platform through which the employee can interact more easily with the employer.”

The agency finalized the payments for March. ”We had a lot of problems with the applications, there were employers who submitted the application 4 or 5 times, especially small employers. That is why the daily reports did not coincide with the final report. We estimated that around 570,000 people were technically unemployed in March, but in the end the number was about 500,000,” said Picu.

After the state of emergency

Technical unemployment period covered by the state will continue until May 15. ”There are discussions whether it will continue after this date for certain economic segments. We focus on active solutions for employers after the end of the state of emergency, we also looked at the measures applied by other European countries, such as Germany,” said Picu. Unfortunately, many measures from other states cannot be taken in Romania due to the Labor Code. ”In Germany, a Social Code is in force, which allows measures such as signing an agreement whereby the employee partially goes to work and is paid by the employer for services, in a proportion of about 40%, and the remaining 60% of the salary is paid by the German state,” said Picu.

In Romania there will be measures taken to support the employer, probably with some of the money paid to those who return to work. The measures will be announced after the end of the state of emergency.

”It has already been discussed at the level of the Ministry of Labor, analyzes are made on economic segments and categories of employees, but the exact plan of measures has not been established yet,” said Picu.

The number of labour contracts suspended in April are expected to be about 1 million. According to Revisal (the registry of employment) data, the number of suspended contracts in April is 1.05 million. Since in March the data in Revisal coincided with the number of claims for technical unemployment with a difference of about 25,000. ”That is why we expect that after May 1, approximately 1 million claims will be submitted for April,” said Picu.

There were many errors in filling in the applications for March, with the most common mistakes being the miscalculation of the value of the payments. „There were also companies that requested payments even for those that did not had the contracts suspended. Until they got used to the procedure, many employers interpreted the measure as a social allowance and filed it regardless of whether they suspended the contracts or not,” said Picu.

”What I did not foresee were these cases in which applications were submitted 4-5 times; claimers did not know if the application was registered or not, so they submitted it again, which made the verification process more difficult,” said the head of ANOFM.

In order to simplify the procedure, ANOFM will now automatically calculate the allowance to make it easier for employers.

Digitization will go on

„As for digitization, we have reason to be optimistic. Time no longer has patience with us, so digitization must be done forcibly and quickly. We need to get to electronic registrations and digital databases very quickly,” said Picu.

He also said that many private companies came to the aid of state institutions. I received countless calls of free help offers from all areas, from HR companies, HoReCa, IT companies. It was felt that this gap between state and private was smaller during this period and even if I did some things wrong, it was overcome very easily. My hope is that this situation will continue, that we will continue the modernization processes and collaborate much better with the private environment,” said Picu.

As far as the future of the labor market is concerned, the state representative advices that employers will take a lot of care of the employees that they have invested in. ”Human resources are the most important for a company, and in Romania it suffers a lot in this regard,” concludes Victor Picu.