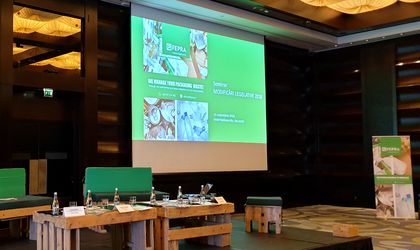 The new legislation on recycling and waste management is bringing a lot of changes for all the companies involved in the process. FEPRA organized a seminary for partners in order to explain the changes and what the main actors in the industry must do.

The first speaker was Gheorghita Diaconu, head of the Enviroment Division at KPMG. She presented the new requirements for packaging waste management, changes that will have a major impact on all retailers, suppliers, distributors and manufacturers. Among the main requests of the law is that 65 percent of the waste must be exploited and 60 percent must be recycled. The numbers are 70 percent for paper and cardboard, 45 percent of plastic materials, 65 percent of glass, 70 percent of steel, 30 percent of aluminum and 50 percent of wood. It is unlikely that these numbers will be met from January 1, 2019, but companies must prepare to meet the requests anyway.

Razvan Mihordea, lawyer at Casa de Avocatura Paraschiv/Penciuc/Mihordea, explained the details of the law and how they can be met, including the role of the implementation organisations (Odl) in the “extensive manufacturer responsability”. There is a problem in the law starting with the notions used compared to the European law; while the EU law uses only ‘responsibility’, in the Romanian version we also have ‘liability’. The notions may be interpreted differently by the companies and the fiscal agents.

Gabriel Moiceanu, the president of the Federation of Intercommunity Development Associations (FADI), had explained the role that Intercommunity Associations (ADI) have in managing and ensuring the traceability of municipal waste. Also the role of the Responsibility Transfer Organizations (OTR) in the scheme as a connection between collectors, producers, municipalities, ADI and recyclers. There are problems also at the level of reporting in the country due to the fact that there are small villages that don’t have the knowledge of all the digital forms that need to be completed.

Ionut Georgescu, president of the board at FEPRA International, put everything in context and explained the way companies stayed cool until 2015 and after that the storm of rising costs and complicated regulations. There are good things in the new law, like the fact that the manufacturer is not alone in the responsibility of the waste for its products. Of course, there are many things to be made and little time, like the fact that all the contracts must be modified by the end of November and in these are implied all the actors in the industry, including the 9,000 collectors around the country.

In the end, Alin Tipilic, manager of Sustainability consulting department at KPMG, explained the audit at FEPRA. The association has a market share of 32 percent in the OTR industry and has 20 employees. In the first half of this year it managed to report a quantity of package of 133,366,126 kg of which 73,238,662 kg were recycled and 6,611,762 were harnessed.

“The draft law regulates the amendment and completion of Law no.211 / 2011 with a view to the correct and complete transposition of Directive 2008/98 / EC, along with the abolition of the obligation of the existence of Regional Waste Management Plans, since the structures to which (the 8 development regions), which allows the application of the “pay for as much” principle by local public authorities and introduces phased obligations on the level of readiness for re-use, recycling and other material capitalization, material recovery, including filling operations, landfills using waste to replace other materials, legal entities on behalf of which building / demolition permits are issued “, according to a report prepared by the Environment Commission and adopted by the plenum of the Chamber of Deputies.

Waste producers and waste holders are required to separately collect at least the following categories of waste: paper, metal, plastic and glass, “to ensure a high degree of recovery,” according to the draft law.

In order to stimulate separate collection of waste from the population, local public authorities apply as a “pay for as much” economic instrument and the economic operators carrying out waste collection and transport operations are obliged to deliver and transport the waste only to installations approved for carrying out sorting, treatment, recycling and storage operations, says this project.