TEILOR to invest RON 30 million before yearend in developing store network in Romania, Poland, and Hungary 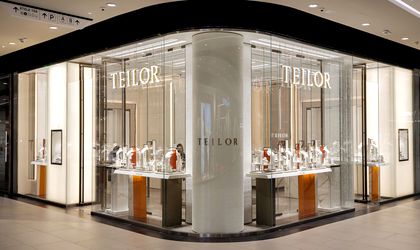 TEILOR, the chain of luxury jewelry stores present across the CEE region, announces investments of 30 million lei before yearend in developing the store network in Romania, Poland, and Hungary. In the following period, the company will open four stores in Poland, of which three are new locations, and one is a relocation. Locally, TEILOR targets the opening of two new stores in Romania as well as relocation and expansion of the other two units.

“Since the opening of the first stores outside Romania in 2019, our goal has been to continue international expansion at an accelerated pace. In 2020, we had to take a break due to the health crisis, but that period allowed us to consolidate TEILOR’s plans for the CEE region. We are thrilled about our recent entry into a new market, Hungary, where we see a solid potential. We are already engaged in discussions about opening the second store in Budapest at the beginning of 2022. In the next few years, we want TEILOR’s store network abroad to be equal to our presence in Romania. In parallel, we consider entering mature Western markets,” stated Willy Dicu, CEO TEILOR.

On September 17th, 2021, TEILOR inaugurated a new store in Budapest, marking the entry of TEILOR in Hungary, the third foreign market after Bulgaria and Poland. The first TEILOR store in Hungary is located in Etele Plaza, a shopping mall opened on the same date in Budapest. With the opening of the first store in Hungary, TEILOR also launched the dedicated e-commerce platform for the Hungarian market, teilor.hu.

Apart from Hungary, the further geographical expansion for the Polish market is already underway as TEILOR will open before the end of 2021 three stores in Warsaw, two new ones and one relocation to benefit from increased foot traffic. The company will also open the first store outside of Poland’s capital, in Poznan. Additionally, TEILOR is in advanced negotiations to open two more stores abroad at the beginning of 2022, one in Wroclaw, Poland, and one in Budapest, Hungary.

TEILOR plans to invest a total of 30 million lei in extending the store network across the CEE region before yearend. For each new store opening or relocation, the average investment is 3.5 million lei. This amount includes expenses related to the location and its premium setup as well as merchandise, which amounts to approximately 1.5 million lei per store in Romania. In contrast, the amount can reach up to 2.2 million lei for stores abroad, driven by the need to hold a larger stock to compete with local players.

TEILOR is the largest fine jewelry chain in Romania with 55 brick-and-mortar stores, out of which six stores are TEILOR Exclusive, offering clients limited series of handmade and carefully selected jewelry inlaid with diamonds and precious stones. By the end of 2021, TEILOR network will reach 61 stores, of which 53 based in Romania, four in Poland, three in Bulgaria and one in Hungary. Besides the investments in brick-and-mortar stores, the company is considering additional investments to develop its online platforms further to enhance customers’ omnichannel experience. TEILOR currently operates five e-commerce platforms – teilor.com, teilor.ro, teilor.hu, teilor.bg and teilor.pl.

For full-year 2021, TEILOR targets a turnover of 230 million lei, a 64% increase compared to a turnover of 140.4 million lei registered in 2020. The increase in sales will be driven primarily by a growing demand for high-end jewelry and increased sales of engagement rings. Historically, TEILOR generated more than a quarter of its annual sales between July and September due to an uptake in engagements during the summer period.