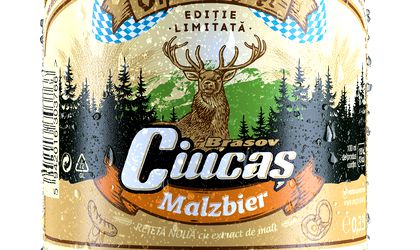 Ciucas has launched Ciucas Malzbier, a limited edition dedicated to the tenth edition of Oktoberfest, which will take place this year on September 6-16, in Brasov.

For 10 years, the Ciucas beer, Brasov’s tradition brand, has been bringing relaxation for tens of thousands of Oktoberfest visitors, whether they were local people or tourists. The limited Ciucas edition was born out of the festival’s spirit in which the Bavarian and Romanian traditions combine. The Ciucas Malzbier keeps the basic Ciucas notes, has a coppery color due to the added malt extract, has a richer taste and a higher alcohol percentage and is a fitting companion for traditional Bavarian and Romanian foods.

The new edition is available until the end of November, both at Oktoberfest and in the modern and traditional trade. During the festival, Ciucas Malzbier will be available exclusively on draught.

“Ciucas beer has been with Oktoberfest since its beginning. It’s a festival that we feel very close to and we are happy to mark the 10th anniversary through a special prize offered to the festival and its visitors, a limited edition inspired by Oktoberfest’s flavours and atmosphere. We hope that Ciucas Malzbier will be appreciated and bring relaxation everywhere it is savoured,” said Andrei Mihaila Craciun, Senior Brand Manager Ciucas.

“The Oktoberfest experience wouldn’t be the same without Ciucas, which has been here for us all the editions. Supporting an appreciated and popular brand among Brasov’s people is very important for us. This year, the experience is completed by a special launch that we are convinced will be well-received by the visitors of our festival,” Anemona Hermeneanu, Events & PR Director Oktoberfest.

Moreover, this year, Oktoberfest’s responsible guests will be awarded various prizes for their contribution to collecting and recycling aluminum packaging and the 400ml plastic cups.

Ciucas brings for the first time at Oktoberfest the smart ECOCAN system for collecting cans and the SIGUREC system of collecting the plastic cups. Ciucas invites the participants to return the cans and cups used at Oktoberfest. Sustainable events that don’t leave packaging waste behind are part of the integrated Ursus Breweries strategy and this is made possible with the help of partners CanPack Recycling, EveryCanCounts Romania, GreenPoint and SIGUREC.