Ido Shacham at MindChain: “We need a track record of successful tokenization processes before people come to trust them and invest in them” 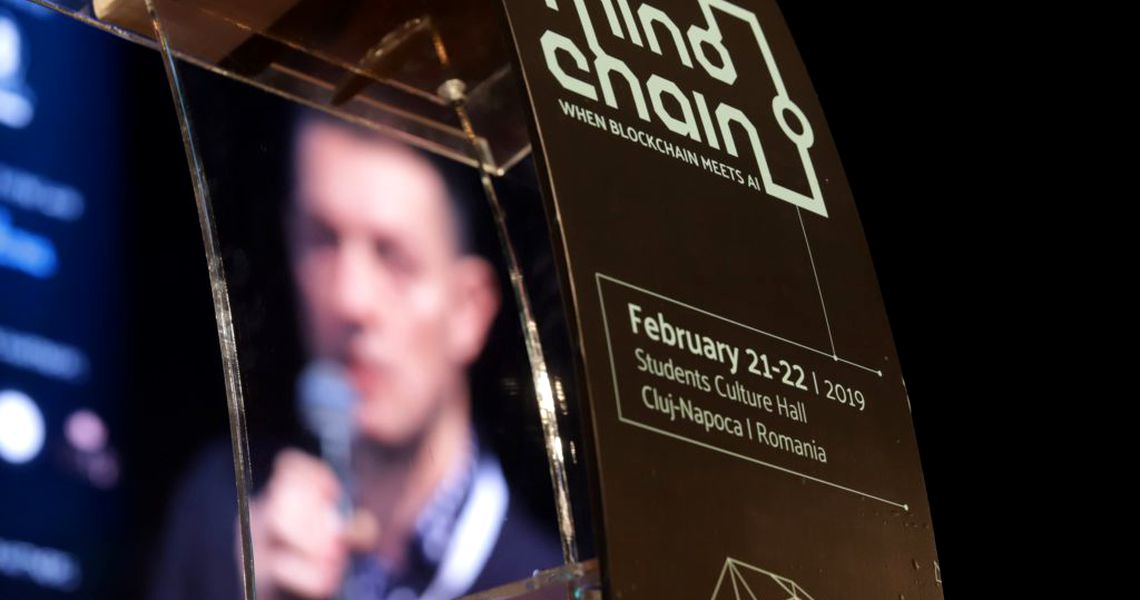 MindChain – When Blockchain Meets AI, one of Business Review’s flagship events of 2019 and the biggest event focused on blockchain and AI ever held in Romania, has entered its second day. Read on to get some insights from local and international speakers on blockchain, AI, the way these new technologies can work together and the impact they will have on our lives. Why blockchain? It illustrates an awakening of political consciousness in the area of innovative technologies – Europe has been lagging behind in tech – we’re not at the top of rankings for tech like cloud computing, big data; all big IT companies are either American/Chinese. So decision-makers realised that we should try to catch up and take a stand and seize the opportunity for blockchain.

Blockchain Competence Centre – it started by looking at business of governments and at the available blockchain platforms and how well they fit with the businesses we have. We selected platform and had a shortlist, we started testing, playing with various platforms. We selected 3 platforms that were promising for different types of business processes – eg. identity, grants (managing, distributing them, increasing trust in the system, reducing fraud), data/documents/legislation. – Sorin Cristescu (leader of the EU’s Blockchain Competence Centre) I hate buzzwords because they give a false impression about what is happening. Blockchain is a buzzword – I’m not a big fan, and I’m not against it either – but it’s nothing more than an encryption and decentralization technology – there aren’t that many areas where it can really be applied well. Blockchain will solve a lot of issues, but it won’t really make the world a better place. It’s not our saviour. – Cornel Amariei – inventor, author, entrepreneur; Head of Innovation at Continental Keynote speaker Anu Bhardwaj (Founder, Women Investing in Women Digital) was happy to see how many women were in the room at MindChain:

“Most of the rooms I speak to are male-dominated, but it seems that women in this part of the world have really stepped up their game, and I thank you for that.” “The ICO mechanism is amazing because it allows so many investors to participate in projects – but most of the people who were involved in the ICO space in 2017-18 didn’t really care about anything but themselves. We are looking at scams on several levels: one is the obvious examples that founders of an ICO just want to take money from the public and run away with it. But there are many other types of scams like doing an ICO and misleading people through false rating, corrupted advisors recommending these ICOs without having any real knowledge or experience. They are listed as advisors for 40-50 organisations and that’s totally unrealistic. They got involved without understanding the implications of what they were doing – that’s what caused the crypto winter.

I think STOs are the future and in the next few years lots of infrastructures will be built for them. They won’t necessarily replace ICOs, it’s a mistake to say that – they are just different mechanisms and STOs are very good in my opinion.” – On Yavin (Founder, Cointelligence) “Blockchain is filling in gaps of AI. Blockchain came to life as a combo of technologies. What we need now is democratizing AI and that can be done through blockchain.

AI is considered to be the next nuclear power. That is why we need to decentralize and democratize data and AI. We need a marketplace for data sharing with open access.

The next part is enabling distributed computing. There are over 4 billion computers around the world and 90 percent of them are underused. But for that we need to incetivise the ecosystem. If a foreign investor invests into an Israeli startup, the government is going to co-invest and invite corporations to come to Israel through incentives. That cultivated a culture that was later translated into entrepreneurship. There is also a government program to give grants to startups and help them enter particular industries with high potential.

Israel’s entrepreneurial culture is due to several unique characteristics: compulsory military service; defense spillover; geographical contiguity – efficiency; low degrees of separation; blending of cultures from all over the world.

About 20 percent of Israeli startups are connected to blockchain.

In terms of regulation, Israel had a more measured approach than other governments, greatly encouraged blockchain startups “Being able to trace the provenance of ownership in real estate is a problem in many places around the world – there’s a natural fit here with the attributes of blockchain. Beyond that there are other things to consider – the tokenization of real estate makes sense in terms of liquidity, transaction costs and many other components linked to real estate.

Tokens provide quality access to areas where you can’t otherwise get in. You can invest in a New York city property with USD 100. It is even useful for pension funds, when you don’t have a large sum to buy a property with a high entry barrier.” “After I figure out all the legal issues of a land, I have to see if the price is right and so on. Everything can be put on the blockchain and it would be a lot easier for me to find all that information for a property in a city from a different country.

People don’t care much for long-term leasing – they prefer ownership or partial ownership. The tokenization process means to transform a property in a number a tokens that people can invest in. But before going into tokenization, a real estate asset has to have all the information available, otherwise the token is not worth anything. We need a track record of successful tokenization processes before people come to trust it and invest in it.”  –  Ido Shacham – Adv. real estate & crypto asset Tax solutions “We have been experiencing climate change for two thousands years. In the last decade the carbon concentration has risen to record levels. Recycling is expensive. It costs more to recycle something than to produce it. To prepare one ton of waste for recycling costs 50 dollars. But if that tone is thrown in a landfill it only costs 20 dollars.

Many of us can be motivated to contribute to the waste management system in order to increase recycling. We are building a platform that will help contributors, citizens to financially support the recycling of glass.” – Dan Dumitrescu (CTO, End of Waste Foundation) “There is no future except the one that we allow to happen – be aware of futurists, documentaries and reports that tell you about the future of technology.

There is a problem in our understanding of innovation. This brand new space of this utter digitalization of our lives and interactions brought up a problem – trust in institution eroded,  creating a social trust vacuum; relativism has taken over, people are having a hard time deciding who to believe.

There is an intrinsic connection between the technological advancement of a society and its military spending. The social media we use today are panoptical. While some governments are trying to regulate them to improve privacy, others like the Chinese government, through its social credit system, bring out the panoptical features even more. We need to combine any space that deals with big data, machine learning, avatars with strong privacy features.

Digitalizing all our data on the blockchain without really knowing whether it’s private means opening ourselves up to major risks.

Apps are a thing of the past and so is Web 2.0. Web 3.0 is made up of artificial intelligence, semantic web, 3D graphics, ubiquity, enhanced connectivity, peer to peer network.” – Adina Popescu (Philosopher, Futurist & Entrepreneur)