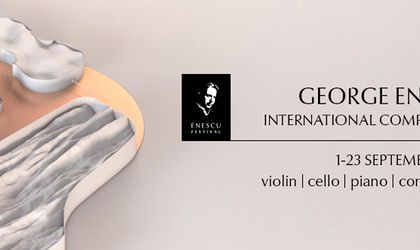 Each fall comes with the magic of George Enescu, so this year don’t book anything between September 1-23. For this year, the George Enescu International Competition 2018’s programme includes a series of extraordinary recitals and unique concerts. The competition opens on  September 1, at the Romanian Athenaeum, with a gala concert given by the winners of the 2014 edition: Stefan Tarara (violin), Eun-Sun Hong (cello) and Josu de Solaun (piano), along with the “George Enescu” Philharmonic Orchestra, conducted by Gabriel Bebeselea.

Read also: Musicians in the making

Except for the First Round of the Competition – eliminatory – the other rounds, as well as the finals, will take place at the Romanian Athenaeum.

Paying a tribute to George Enescu’s music, several of his works will be performed at the 2018 edition, mandatory in the competition – for the Cello Section: Sonata no. 2 in C Major Op. 26 (Semi-Final) and the “Symphonie concertante” Op. 8, in the Final; for the Violin Section: Ménétrier – from “Impressions d’enfance” Suite Op. 28 (Round II) and in the Semi-Final, contestants may choose between Piano and Violin Sonata no. 2 in f minor Op. 6 and Sonata no. 3 in a minor Op. 25. In the Piano Section, young contestants can present one of the following compositions by George Enescu: Suite no. 2 in D major Op. 10, Sonata no. 1 in f-sharp minor Op. 24 or Sonata no. 3 in D major Op. 24.