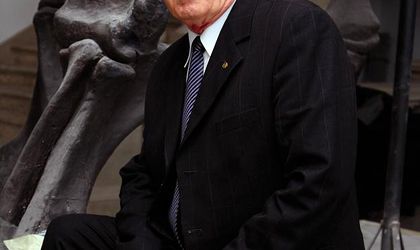 EUR 13 million has been invested in the modernization of the Grigore Antipa Natural History Museum since works started in early 2009. The museum is now preparing to reopen its gates in July and expects to increase its visitor number by at least 25 percent over the year ahead, Dumitru Murariu, general director of the museum, told BR.

Info touch screens, 3D screenings,  constellation projections, reorganizations of the over two million exhibited items are all only a part of the Natural History Museum’s facelift. The money for the renovation came from a loan taken out by the Ministry of Culture from the Council of Europe Development Bank and state funds, plus an estimated EUR 600,000 from structural funds. The museum was initially planned to reopen within a year, in 2010, but funding issues delayed the works, Murariu told Business Review. The change was needed because “the Natural History Museum had to adapt or die”, either stay in touch with the global tendencies or lose its visitor base as years pass by.

“The delay was due to the crisis, as the payment to the contractors, Artex Services International, could not be made and they only agreed to continue their work after receiving the necessary installments,” said Murariu, adding that this project was very much sought after by the firm for the boost it would give its portfolio. The same company undertook a similar project in Sibiu back in 2007, when Sibiu was the cultural capital.

Specialists from the firm went to Great Britain, France, New York, Austria, Germany and neighboring Hungary to gain insight into today’s requirements for a natural history museum. A private donation was made by a local businessman to go towards some exhibits. The donor, who wished to remain anonymous, is a legal hunter and took care of all the paperwork necessary for the donation.

The history of the Antipa Museum goes back almost two hundred years. The Bucharest National Museum (Muzeul National din Bucuresti) was founded between 1834 and 1842. In 1892, Grigore Antipa, a Romanian Darwinist biologist who studied the fauna of the Danube Delta and the Black Sea, became the director of the museum that now bears his name, a position he held until 1944. In 1906, the Natural History Museum moved to a new location, and its present-day site – Kiseleff Road 1.

This was the first building in Romania to be specifically built to house a museum. Since then, however, the venue has endured two world wars (including significant bombardment in the Second World War) and at least two major earthquakes (one in the 1940s and another in 1977), thus making renovation a necessity. Another factor was the 100-year anniversary since the museum’s foundation; therefore the process was begun in 2007. Under local law, Murariu said, a museum should carry out improvements every five years. This unfortunately had not occurred previously and made the modernization works mandatory. Around 30 percent of the funds went into the renovation of the building, while the remaining 70 percent funded the restructuring of the exhibits.

Major changes to be unveiled

During the modernization of the building in 2009, all the items from the museum had to be moved to other locations. But this effort was well worth it, added Murariu. The building’s structure and extension, as well as the electrical installation, were major jobs. The latter needed to be replaced to accommodate the new air conditioning system that creates the right atmosphere for the exhibits. In April 2010, the exhibits themselves were overhauled.

Futuristic images in the media suggest a major transformation, considering the past image of the Antipa Museum. And the modernized exhibits combined with the general director’s vision are ramping up anticipation as the scheduled opening date of July approaches.  Murariu, whose modern outlook belies the fact that he is close to the retirement age, described 3D screenings and touch-screen displays with the familiarity of a high school student.

These technologies will all be present in the updated museum, in line with global trends. Movie screenings will be organized in five locations inside the venue – including the projection of constellations in the northern hemisphere.

Sixty-six info touch-screens will be spread throughout the museum, explaining the various displays. Secured glass will better protect the exhibits, motion sensors will activate the lights and an air conditioning system located at the entrance of the museum will filter and cool the air to ensure optimal conditions for the protection and preservation of items.

The Romanian fauna has been grouped in the semi-basement, while previously it was dispersed throughout the building. This part of the reorganization did not cost a lot, since it was mostly done with the aid of museum staff; it was the computerized projections, the planning of new exhibits and the required micro-climate that were more expensive. Engineers, artists and restorers lent their expertise to their project and their feedback was sometimes regarded as more useful than that of the museum’s own staff, since “it reflected the much sought after visitor’s perspective better,” said Murariu.

The museum thus avoided being too “scientific” or “academic,” in the words of the director, and focused more on its future visitors, making the information user-friendly but maintaining the rigor appropriate for such an institution.

“Antipa was himself a modernizer and would have wanted such a modernization for his museum,” argued Murariu against those who initially opposed the changes (though who have now come around). “The museum excels through the diversity of the fauna that it supplies, said international experts,” added Murariu, who noted that a change was needed to highlight this aspect.

The collections will no longer present animals systematically in groups and sub-groups, but through themes, with so-called dioramas, depicting animals in their natural environment, recreated with the aid of special sound and light effects, according to various bio-geographical criteria and regions. There have been no major changes to the museum’s estimated two million items, since the hunting of certain animals has been forbidden in several countries across the globe. Newcomers facilitated by the above-mentioned donation consist of several elephant heads, a polar bear, a Canadian sheep and a musk ox.

Still in situ is the Deinotherium Gigantissimum skeleton, an ancestor of today’s elephant, which has had a place in the museum since 1906 after being unearthed in Vaslui county. The 4.5 meter high skeleton is believed to date back over 6 million years. The museum’s logo, representing the enigmatic image of the skeleton, which also features Grigore Antipa’s stylized initials, was created in house, by one of the museum’s graphic designers, some time ago, Murariu told BR.

New exhibits may find their way to the museum, as has happened in the past, through exchanges between various museums around the world or donations. The line-up will be renewed constantly. Until then, however, souvenir shops, a multimedia hall, children’s laboratory, café, as well as rest and information spots will be established throughout the museum. Some of these will be money generators, keeping the price of tickets low so the institution remains accessible to a larger audience, said Murariu. Entrance will cost about RON 10, with discounts for pensioners, students and groups.

“Tickets will not cost over RON 10, because many families may wish to visit the museum and it should not be too costly for them.” During Antipa’s time as museum director, he reported an estimated 11 million visitors over 15 years. Under communism, the largest annual number of registered visitors to the permanent exhibition was 350,000 – mostly due to the mass school trips organized nationally back then.

“Nowadays the visitor is seeking culture through choice – he or she is no longer forced to visit the museum, as was the case under communism,” said Murariu, who is looking to the future optimistically and is sure that the modernization process will bring the breath of fresh air that the museum had needed for quite a while.

The National Museum of Art of Romania

Most popular exhibitions of 2010, besides the permanent collections: Dracula, Between Ruler and Vampire (from July-October, an estimated 10,000 visitors) and Facets of Consciousness: Goya’s Caprices (March-May)

The new museum supplies, in one of the world’s most recognizable buildings, the Palace of the Parliament, a monographic archive, library, photo archive, digital image databank, events and thematic archive, as well as various events and exhibitions

Most popular exhibitions and events of 2010, besides the permanent collections: the Thai Culture Festival attracted 15,000 visitors on one day (18 September), while on May 15, 3,500 guests visited the museum between 9.00 and 14.00

The museum contains historical Romanian artifacts from prehistoric times up to the modern era. The permanent displays include a plaster cast of Trajan’s Column, the Romanian Crown Jewels and the Pietroasele treasure. The museum is housed inside the former Postal Services Palace, also home to a stamp museum. A late medieval archaeological site was recently discovered under the building

The museum has several locations across Bucharest, including important memorial houses. Its main center is the Sutu Palace (I.C. Bratianu 2), but it also encompasses a picture gallery, temporary exhibitions and restoration laboratories