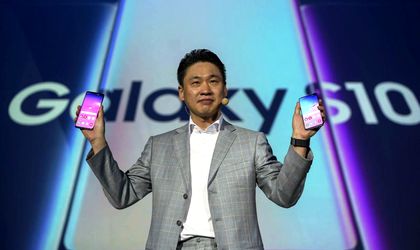 Samsung Electronics launched in Romania the new Galaxy S10 range, at an anniversary event marking 10 years of Galaxy. Pre-sales for the new phones began on February 21, and today smartphones are available in stores, but also online in the shades: Prism White, Prism Black, Prism Green, Prism Blue and Canary Yellow. The Galaxy S10 + also comes in two new ceramic versions: Ceramic Black and Ceramic White, but also with a capacity of 1TB.

“In 2019 we mark 10 years of Galaxy, which makes us look back and look at what we have achieved as a brand. With each Galaxy S we’ve been able to bring significant industry innovations, and that’s why we thank our partners, users and everyone who has believed in us. We work responsibly and transparently to ensure that when we launch a new device or new technology they are adjusted to provide the best experience and the best technologies,” said Tiberiu Dobre, Head of IM Division, Samsung Electronics Romania.

10 years ago, Samsung was at the beginning of the smartphone-making, the market being dominated by Nokia, Apple and HTC. Today, the Korean producer is number one in the world and in Romania with a portfolio of smartphones that covers all the categories, from the cheap and workable phones to flagships priced at thousands of EUR. Also, it competes with Huawei mostly on the Android phones, but also with Apple. The Americans are lacking in innovations, a thing visible on the decline of the sales, but it is still a huge producer that managed to stay on top.

10 years of Galaxy – a decade of technological innovation

The Galaxy S has brought some of the first innovations in the industry and, at the same time, the series has differentiated over time through the whole system of functionality offered, but also through the premium design, designed to be as easy to use as possible, through innovation and, last but not least, through power.

Samsung has been a roadrunner with the release of the first S, at least on the Android smartphone category, and continues to do so today with the new Galaxy S10 and the innovations brought about with its release: 5G Galaxy S10 5G, 1TB capacity, the first HDR10 + certified smartphone, smart camera and performance, and maximum security. The Galaxy S10 has the best screen ever made by Samsung, the first AMOLED dynamic screen in the world. Being the first HDR10 + certified smartphone, the screen delivers vibrant digital content, a wide range of colors for dynamic imagery as realistic.

As a result of an innovative engineering process, the Galaxy S10’s unique Infinity-O screen combines a series of sensors with camera technology in a hole-in screen display – to maximize screen properties and keep us away from distractions.

Galaxy S10’s AMOLED dynamic display also includes the first embedded ultrasound fingerprint scanner that reads the 3D contours of the physical fingerprint – not a 2D image of it – for an anti-spoofing improvement. With the world’s first FIDO Alliance Biometric Component certification, this biometric authentication provides state-of-the-art security to keep your phone safe. Still, the technology is at the beginning and the reading of the print doesn’t work great, as some of the testers said last night.

Also, following the Samsung tradition of camera specifications, especially Dual Pixel and Dual Aperture, the Galaxy S10 introduces new camera technology and advanced intelligence that makes capturing photos and videos much easier. Both front and rear cameras can shoot at UHD quality and, for the first time in industry, the rear camera offers the flexibility to record in HDR10 +.

The Galaxy S10 has both premium hardware and machine learning software. Featuring new sharing capabilities, improved performance thanks to artificial intelligence, and smart Wi-Fi, the Galaxy S10 is the smartest Samsung device.