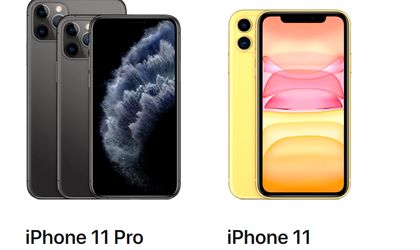 Apple launched the latest models of phones, together with a new iPad, a watch and several new services. Apart from iPhone 11m the company made iPhone 11 Pro and iPhone 11 Pro Max, where Pro, used for the first time by Apple, stands for better camera and performance.

The iPhone 11 was the first to be announced, being the base model announced for the new generation of Apple phones. It will be available in several colors (black, green, yellow, purple, red and white) and the starting price is USD 699.

iPhone 11 will retain the design idea designed for the iPhone XR and is made of glass and aluminum. Also, the 6.1 inch Liquid Retina LCD screen will be retained, the improvements being made on the camera and video side. The new iPhone model will have a two-camera system: a main camera, 12MP f / 1.8 and a ultra-wide f / 2.4 camera The front camera will also have 12MP, a considerable improvement over the previous model, whose front camera had 7MP The front camera can now shoot in 4K resolution and in slow motion. The iPhone 11 Pro was designed to replace the XS, but with an improved look, with matte glass back and stainless steel on the side. The iPhone 11 Pro will be available in four colors (green, gold, silver, gray), starting at USD 999.

iPhone 11 Pro also comes with improvements to the camera, having three cameras, one of them with zoom, with f / 2.0, an improvement from f / 2.4 on previous models. The new model comes equipped with a 5.8 inch Super Retina XDR “OLED display with 1,200 nits brightness. As for battery life, the 11 Pro should have four hours of battery life in addition to the iPhone XS.

iPhone 11 Pro Max is an improved version of the Pro 11, but both are equipped with three cameras and premium finishes. The screen size is 6.5 inch and the battery life would be five hours longer than the iPhone XS Max. The price of this model will start at USD 1,099.

All new iPhone models have come with camera enhancements, such as a new night mode, new portrait mode effects, and the “Deep Fusion” feature, which will be available with the launch of iOS13, which is in the making a detailed photograph taken from several frames.

For the 11 Pro and 11 Pro Max models a new video editor has been launched, integrated into the camera application.

The launch date for the three models is September 20, due to arrive in Romania in the last week of September or in the first week of October.

In addition to the new iPhone models, Apple has announced the launch of new iPads, Apple watches and Apple Arcade and Apple TV + applications.