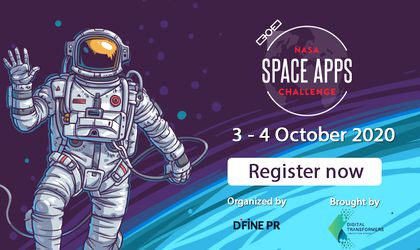 NASA Space Apps Challenge opens the registrations for the fifth edition of the hackthon which takes place in several cities in Romania and in other over 200 points on the world map, in the last 9 years. “Take action” is the event’s motto for October 3-4 and the invitation addressed by the organizers to participants from around the globe who will develop solutions to the proposed challenges, correlating NASA data, in a collaborative manner.

This year’s edition will be organized online and can be attended by technology enthusiasts, programmers, creatives, entrepreneurs and all those who, through the ingenious solutions proposed, can contribute to new scientific discoveries, in order to improve life on Earth.

Those interested can complete the registration application already available on the pages of the cities of Bucharest, Cluj Napoca. In Romania, the event is organized independently in other cities. Dedicated pages can be found here.

The main thematic categories are: Observe, Inform, Support, Create, Confront, Connect. The specific sub-themes will be announced here in September. The teams can address one of them during the hackathon. Enthusiasts are also invited to take inspiration from the videos uploaded by NASA Space Apps Challenge on Youtube.

“The technology and collaboration tools we choose to use in this competition have the role of uniting people and nations from everywhere. Therefore, the generic theme of this year’s hackathon is: ‘Take action’, a subtle urge that we can make a difference in this world even from the comfort of our homes. Adaptability and unity are the two premises from which we set off this year and we can’t wait to discover what new creative solutions will be showcased “, said Diana Iosu, organizer of NASA Space Apps Challenge Bucharest and Cluj.

The International Space Apps Hackathon is an innovative incubation program of NASA organized annually since 2012 in hubs from all over the world. Last year,  approximately 29,000 participants sign in 225 events from 71 countries. In Romania, the competition was organized in Bucharest, Cluj and Craiova.

The Space Apps concept relies on collaboration, creativity and critical thinking, stimulates interest in science, space and Earth exploration, and also encourages growth and diversity among the next generation of scientists, technologists, designers and engineers. Space Apps is administered by the Division of Earth Sciences, Science Mission Directorate, at NASA headquarters in Washington, DC.

In Bucharest and Cluj Napoca, the event is organized by DiFine PR and Digital Transformers – Innovation Studio. In Bucharest, the official partner of NASA Space Apps Challenge 2020 event powered by NASA is Thales.

NASA Space Apps Challenge, the largest global hackathon in the world, which is...