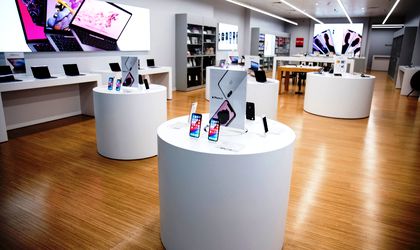 Nearly 10 percent of Romanian buyers who want to purchase a new smart device choose the Buy Back system, according to estimates by representatives of iStyle, the largest Apple Premium Reseller network in Central and Eastern Europe.

“Our retail network provides customers with the “Buy back” system that can be used to purchase new phones in exchange for handover of terminals. At least in the Romanian iStyle network we are talking about a “double digit” percentage, so somewhere at 10 percent of those who prefer this way to purchase a new device. As for the discounts that customers can get through “Buy back” they vary depending on the status of the used handset, and can reach up to 60 percent of the cost of a terminal smart new,” said Dragos Vrinceanu, retail manager iStyle Romania, at Apple’s new smarthone showcase – iPhone XS and XS Max as well as the Apple Watch Series 4.

The two variants of the new iPhone are available from Friday on iStyle’s reseller network in Romania. Device design is exclusive and combines “surgical quality” and the most durable glass ever used for a smartphone in three chromatic options – gold, silver and gray.

The super-retina screens of 5.8 inches and 6.9 inches fully cover the front of the devices and provide accurate color, HDR and genuine black tones. The Bionic 12 A12 processor, equipped with the new generation of Neural Engine technology, offers the opportunity to experience augmented reality. Facial identification Face ID is even faster, and the revolutionary dual camera system lets you dramatically adjust the backdrop for portrait-quality photos.

Another novelty from Apple is the Watch Series 4, a completely redesigned and redesigned model. At the design level, the screen size was increased by 30 percent compared to the previous version to 40 and 44 mm. The Apple Watch Series 4 features the new heart rate monitor and health detection features as well as a SOS emergency. Also for sports enthusiasts, the intelligent clock automatically detects the beginning and completion of physical exercise, includes new yoga and hiking training, and features advanced roller functions such as cadence and rhythm alerts.

The starting price for Apple Watch 4 is RON 2,100. It varies depending on the selected bracelet and screen size. There are bracelets that can reach the price of the clock itself.

iStyle registered a turnover of approximately EUR 34 million in 2017, double the data recorded in 2015r.

Apple introduced on September 11, 2018, at Cupertino (California), the largest and most expensive smartphone ever launched by the US company.

The XS XS Max, which is sold at USD 1,099 – the most expensive smartphone ever released by the US company – has a 6.5 inch screen. The iPhone XS model has the same 5.8 inch size as the iPhone version last year, and a starting price of USD 999. These are the first dual-SIM iPhone, a very popular feature especially in Asian markets.

The new models, which also have the phone’s facial recognition unlock feature, will be sold from September 21 in the US and other 30 countries. In recent years, Apple has expanded its efforts to launch more and more advanced models to expand its market share, with strong competition from its rivals in China and South Korea.

The iPhone XR Aluminum, which sells from USD 749, has a 6.1 inch screen, available in various colors, including blue, yellow and red.

At the time, Apple also introduced the new generation of the watch Watch4 with a larger screen that can be used to perform electrocardiograms to detect heart problems.

iPhone is Apple’s most important product, which brings about two-thirds of its revenue. In August, Apple became the first US listed listed stock market to reach USD 1,000 billion after the quarterly earnings reported recently. During the Aug. 2 meeting of the New York Stock Exchange, Apple shares rose 2.8 percent to a record USD 207.05 to reach the USD 1,000 billion mark.