Huawei launches Mate X, their foldable phone with 5G connectivity and a price-tag of USD 2,600 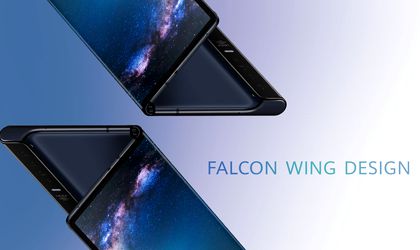 Two days after Samsung announced its foldable phone, Huawei launched Mate X, their foldable device. With a screen that turn into a 8 inch tablet, Mate X will be available later then Galaxy Fold, in the mid 2019 at a higher price, USD 2,600.

Mate X was launched at the start of MWC 2019 in Barcelona and it will come with a 5G capability as well. This looks ok on paper, but it is still months, if not years, away from a real use of a 5G network. Even if some analysts are saying that it may not be a good idea to buy a pricy phone today without a 5G capability, it seems unlikely that we will be able to use 5G before the second part of 2020.

Anyway, foldable phones are the main innovation today, shadowing the fingerprint-reader built in the screen that Samsung put on S10 or the vibrating-screen for a better sound announced by LG.

Huawei named the design of the gripping handle he “Falcon Wing”. There is a bendable hinge that cover the screen on the outside when its open that resembles Lenovo’s hinge used a few years ago on the Yoga laptop. The phone has 3 screens in order to be usable in folding position without worrying that the display will be scratched like it happens on Galaxy Fold that has a screen which closes on the outside so one part of the display will be used as the back of the phone.

Mate X is equipped with Huawei Balong 5000, the world’s first 7nm multi-mode 5G chipset that achieves 5g download speed. Also, it has Kirin 980, the latest processor from the Chinese producer. It is interesting that the phone 2G/3G/4G/5G frequency so it can be used pretty much anywhere. The fingerprint-reader is integrated in the power switch button.

The phone will have a very steep price at USD 2,600 but it is hard to say that it is too expensive. It will not enter the main-stream market with this price, but it is glimpse of what future will look like. We can expect Apple to work on a foldable phone in order not to remain too much behind the main competitors.