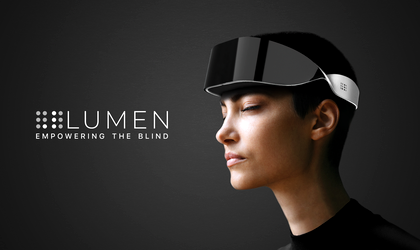 The Romanian Startup .lumen (dotLumen), has just released details on the first glasses designed specifically to help the mobility of the blind.

After years of work combining multidisciplinary fields, the founders of .lumen present a solution aimed at the mobility of the blind.

“There are over 40 million blind individuals worldwide today, and expected to surpass 100 million by 2050. When it comes to their mobility, the most known solutions are thousands of years old – the guide dog and the waking cane. The guide is unanimously seen as a good solution, but it comes with a few disadvantages. Training a guide dog can cost up to $60,000, and blind people can’t take care of guide dogs on their own easily. Because of this, there are only 20,000 guide dogs to 40,000,000 blind. We considered it is a fundamental need to develop a solution for the other 39,980,000 blind individuals who can’t benefit from a guide dog”, – Cornel Amariei, CEO & Founder .lumen.

.lumen designs a system which uses artificial intelligence and robotics to duplicate the benefits of a guide dog, in a scalable solution using the form of a headset.

The final design of the product is soon to be released. .lumen plans a full system integration, up to pre-production period, by the end of Q1, 2021. The system will start production in the second half of 2021.

Until now, tests have been performed with over 200 blind individuals from Romania and abroad, and over 2,000 tests are to be completed by the end of the first quarter, next year.

Major investments in the field of assistive technologies

“.lumen is a Romanian startup which showed a swift development. The company’s goals are aligned with the Sustainable Development Goals by the United Nations. We are positioned as the only integrated solution for the mobility of the blind. It is important to realize that an increase in mobility results in better education, better employment, and better social life for the blind” –  Mihai Ivaşcu, Chairman of the Board .lumen, CEO & Founder M3 Holdings: Moneymailme, M3 Payments and Modex.

Only this year, .lumen has attracted over $1 million in investment rounds. The organization has tripled in size in the last few months and is expected to increase to over 100 employees by the end of 2021.

The .lumen glasses mimic the premiere features of a guide dog, in a different format:

The .lumen team is made of seasoned researchers, scientists, professors coming from backgrounds such as engineering, computer science, electronics, disability studies, industrial design, testing and others.

“This startup has grown quickly because of the more than 30 professionals coming from complementary subjects such as: mechatronics, robotics, industrial design, psychology, business development, and even some subjects we had to invent. With each iteration we researched, designed, built, and tested each component of the system, ranging from functional elements up to ergonomics and the ethical and ecological use of resources. We didn’t aim to build just a solution for the visually impaired, but the best product to aid them in everyday life.” – Dr. Gabriel Chindris, CTO .lumen, Associate Professor at the Technical University of Cluj-Napoca, Romania.

.lumen started as a research project at the end of 2018, and transformed into a startup at the beginning of 2020.

It was founded by Cornel Amariei, a renowned inventor, together with Dr. Gabriel Chindris, a university professor in electronics and Mihai Ivascu, CEO & Founder of M3 Holdings.

Cornel was born in a family where both of his parents have locomotive handicap, severely limiting their mobility. Growing up in such an environment made Cornel realize the impact disabilities bring on people. He is previously known for operating as a Head of Innovation in a large Automotive company and as a nominee in the first Forbes 30 under 30 Europe list. Furthermore, he was the first Romanian to ever obtain the prestigious Ten Outstanding Young Persons of the World award by Junior Chamber International, previously obtained by personalities such as JFK and Elvis Presley.

Gabriel is a specialist in the field of electrical engineering. Previously he founded an R&D group inside the Technical University of Cluj-Napoca, Romania, with 15 researchers. Over the years, they built hundreds of products and projects for the automotive world, consumer goods or even technologies for space exploration.

Cornel and Gabriel met in 2016, and since then they built together over 50 advance development projects for the automotive world.

Joining them, as Chairman of the Board, is Mihai Ivascu. Mihai is the founder of M3 Holdings and the Ingenium Group, containing software developers, engineers and business developers in centers such as London, Washington D.C. and Bucharest, Romania. He was also awarded as a Forbes 30 under 30 and is a finalist of Ernst and Young’s Entrepreneur of the Year.

Cornel Amariei – CEO of .lumen, inducted into the Global Business Hall of...