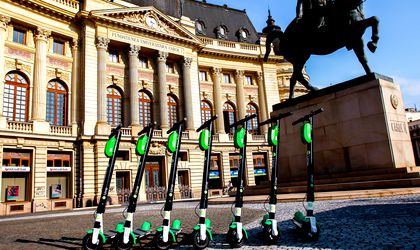 The shared economy and micromobility are increasingly discussed in the context of the development of modern cities just like Bucharest. Vehicle rental services per minute, i.e. cars, bicycles or scooters, have gained extremely high popularity among city dwellers. Traffic jams, parking problems, air pollution, insufficient public transport offer – all these prompts residents to look for alternative, cheaper and greener means of transport.

Bikes and scooters rented for minutes turn out to be a great solution for so-called first and last kilometer journey through the city. They allow you to quickly move a short distance by passing traffic jams, for example on the way back home from the tram stop. As indicated by the data collected by Lime after 8 months of activity in Bucharest the majority of Lime riders were local residents, who used the vehicles to quickly reach their schools and workplaces.

The Romanian Government also recognized the importance of reducing car traffic and aims to introduce legal measures to support sustainable transportation and improve air quality. The improvement of city infrastructure and developing the bike-lane network across Bucharest is also highlighted in long-term planning.

Micro- and electromobility makes it possible to take a new path for the development of urban centers, but it also requires a lot of commitment from both municipalities and other interested parties, i.e. investors, municipal activists and public transport establishments. Political decisions in this area should be taken first at the local level.

For this reason, the role of municipalities is crucial, as their actions should be ahead of initiatives taken at the level of central authorities. The basis of activities is the statutory requirement of the minimum percentage of low-emission vehicles in the vehicle fleet used by public offices. Local governments can also go beyond the top organizational or political framework and decide to cooperate.

Providers of shared mobility solutions are constantly cooperating with city authorities and community leaders who set the goal of creating a car-free infrastructure, including protected bike paths or multi-functional paths. City representatives also strive to increase the mobility of residents and make public transport even more accessible to them. In addition, cooperation between operators and representatives of authorities is a key point in raising safety standards for e-scooters and bicycles.

Data obtained from operators allow them to better understand the needs of urban residents. They are also a valuable source for people managing urban space in the context of further development and planned investments.

E-scooters fit into the direction of the development of cities striving to optimize the structure of public transport and fill the gap in the communication system related to the problem of so-called first and last kilometer. As indicated by global statistics, nearly 50% of riders use e-scooters to reach public transport stops.

In addition, micro-mobility services are a response to the challenges of cities related to reducing the number of cars and improving air quality. In addition, we must keep in mind that a significant part of scooter travel prevents people from taking the car. If we also consider car rentals, car-sharing and taxis, scooters can replace 40% of car trips. Emission, especially ultrafine particles, cause negative health effects. As a result of the small size they can get into the bloodstream or to the brain through olfactory nerve.

The quality monitoring network in Romania that monitors particulate matter emissions PM 10, PM2.5, and PM1 shows constant high levels of pollution in Bucharest, above the concentration allowed by law. Micro-mobility proves to be a sustainable solution for the city, in only 8 months from the launching, Lime has registered thousands of hundreds of rides among them over 400,000 have replaced the use of cars. This means less traffic and less pollution. Sustainability is core to Lime’s mission, and it provides a safe, affordable and zero direct emission way to travel reducing the ultrafine particle concentration.

Nowadays nearly 55 percent of the world’s population lives in cities, and before 2050 it will be even 68 percent. Population density in Bucharest is approximately three times higher than the rest of the capitals in the region, being mostly concentrated in the urban area. At the same time, in terms of surface, Bucharest is one of the smallest capital cities in the region, with only 412 square kilometers of urban area. Bucharest is next to Moscow and Istanbul amongst the busiest European cities in terms of car traffic, according to TomTom Traffic Index.

The most recent statistics collected show that Bucharest people spend 48 percent extra time, in traffic every day. In general, Bucharest people daily spend almost 30 minutes stuck in traffic, in the morning and in the evening. Like other capitals, the dominance of cars in the city is unsustainable in this context, in the long term. To change this, it is necessary to introduce services that people will want to use – providing them with a comfortable way to get around the city. Car rental for minutes and micro-mobility are the opportunities for cities to revolutionize the communication system and develop smart cities based on the needs of residents. We also see how well this form of mobility is compatible with public transport. 40 percent rides on Lime e-scooters are preceded or followed by taking public transport.