OMV Petrom supports the development of the circular economy and becomes the most important partner of Flip.ro 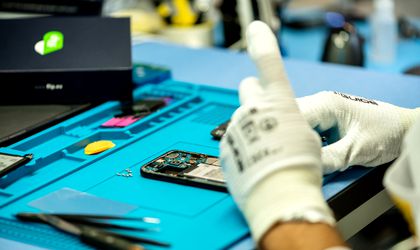 OMV Petrom, the largest integrated energy company in South-Eastern Europe, launches a new project to support the circular economy by signing a partnership with Flip.ro.

Thus, over 500 smartphones intended for scrapping were purchased by Flip.ro to be refurbished and resold with a 12-month warranty. The contract between the two companies, signed for a period of three years, provides for the takeover of more than 2,500 smartphones.

Alina Popa, CFO OMV Petrom: “By reintroducing into circulation the refurbished smartphones, we contribute to reducing the volume of waste and carbon emissions. Thus, we prove that circular economy projects can be successfully implemented on the Romanian market.”

Nicolae Trofin, Chief Sales Business Partnerships within the Flip.ro: “We are glad that an important company, such as OMV Petrom, has chosen to get involved in this important circular economy project. Through this collaboration, we are re-bringing back hundreds of new terminals and thus contributing to the protection of the environment. We are convinced that other companies will follow the example of OMV Petrom and will choose to recycle the smartphones that would otherwise have become waste”.

OMV Petrom also supports other circular economy projects with social impact. The company has been actively involved in the re-circulation of refurbished computers, through “Let’s click on Romania” project, developed through a partnership between private companies, Ateliere fără Frontiere and 230 schools from disadvantaged areas. During the project, 4,000 refurbished computers were donated to 110 public schools. Through this project, emissions of almost 600 thousand kg of CO2 were avoided.

OMV Petrom aims to achieve carbon neutrality for its operations by 2050 and to contribute to the process of decarbonization of its customers. To generate new low- and zero-carbon projects, the company will invest 3.7 billion euros from its 11 billion-euro investment plan by 2030. This is the largest private investment plan in the Romanian energy sector.