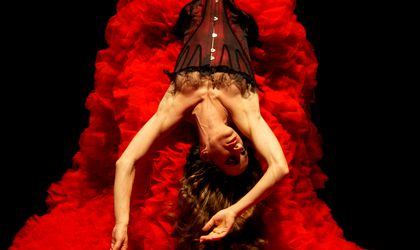 The Portuguese Vortice Dance Company presented this Monday their Dracula show, a reinterpretation of the myth of the count. It will follow this Thursday with Soliloquy about Wonderland, an exploration of the daily situations to which we all react intuitively and similarly.

Portugal’s Vortice Dance Company was created in 2001 by directors and choreographers Claudia Martins and Rafael Carrico.

For the Dracula show, the two choreographers drew on several sources of inspiration, from Bram Stoker’s horror novel to legends and myths from different cultures.

Soliloquy about Wonderland tells the story of the daily situations we face, such as death, loneliness, heartache and environmental concerns. The show promises a metamorphosis that can be seen as therapy, an alternative to deception and the incapacity to overcome worldwide sadness alone. The dancers are Martins, Carrico, Liborio, Jaana Nurminen, Diogo, Ana Rafaela, Rita Pereira, Angela and Luz Bacellar and Vanda Stefanescu.

The event is sold out, but fans can still find tickets at Grand Cinema Digiplex, which will host a live transmission of the show.