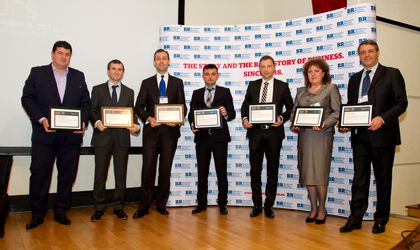 Romania’s Business Review, the long standing business weekly that is celebrating its 15th anniversary this year, awarded Romanian companies and entrepreneurs that continued to invest and create jobs locally, during the first Romanian Investors Forum organized on Monday evening.

The magazine has awarded companies in the Innovation, Human Resource and Investments/Capital Markets categories. Business Review acknowledged the efforts of companies that continued to expand their businesses despite uncertainties regarding the economic outlook.

Romanian Insoft Development & Consulting, a provider and integrator of IT&C solutions, snapped an award in the innovation category. Cristian Aciubotaritei, CEO of the company, took the prize, commenting the company has entered its fifth year of activity.

The firm came first in the Rising Stars category in the Deloitte Technology Fast 50 CEE index. Its innovative IT solutions for the business, healthcare and education sectors along with investments in R&D lead to a 2884 percent hike in revenues in the past three years.

MB Telecom, a system integrator that designs and installs hi-tech equipment, generally as part of large-scale security projects, received an award for innovation for the first aircraft scanner in the world, Roboscan 2M Aeria, which received the grand prize this year at the 41st International Exhibition of Inventions of Geneva.

“The core of our activity is not to receive prizes but to be involved in the industry and the real economy and this is what we do,” said Mircea Tudor, president of MB Telecom.

TeamNet, a Romanian provider of IT services, received a prize in the innovation category for its initiative to build and operate unmanned air vehicles (UAVs) in Romania. The first missions that the Hirrus drones participated in were related to data gathering for academic projects.

George Stan, founder and head of engineering at TeamNet, said: “I have always considered that innovation is part of our DNA as a company and as people.”

He said the drones were one of TeamNet’s bets for the future, adding that 98 percent of the drones’ components are made locally.

Agricola International, the Romanian meat producer, was granted an award in the human resource category. The company was recently ranked as the best Romanian employer by Aon Hewitt in the category of SMEs with less than 1000 employees.

Ramona Popa, HR manager at Agricola Bacau, said: “This prize represents the appreciation received by the top management of the company for developing the human resource.”

Romanian DIY retailer Dedeman was also awarded in this category for employing 960 people after opening six new stores across the country. In addition, the retailer was awarded in the Investment category after putting EUR 73 million in expanding is network of stores this year.

Romanian entrepreneur Dorinel Umbrarescu, who is one of the biggest road infrastructure constructors in Romania, was granted a prize in the investment category after paying EUR 10.3 million for acquiring the controlling stake in ATE Bank Romania. Marinel Burduja has been named president of the new lender called The Romanian Bank for Credit and Investments.

Romanian Comfert, a company active in the agriculture sector, was awarded for the acquisition of bakery producer Pambac, along with Popas Trebes, another Romanian firm.

The special prize in the capital markets category was granted to Romgaz, the state-owned gas producer. The company raised EUR 391 million from listing a 15 percent on the Bucharest Stock Exchange. This was the largest IPO on the local market.

Aristotel Jude, project manager for the Romgaz IPO, commented the listing has put Romania on the international investors’ map.