The most expensive historical buildings on sale in Romania 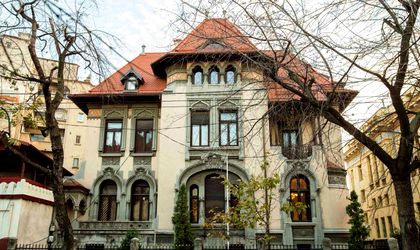 The romanian history was badly mutilated by almost 5 decades of communism, and the historical buildings had the same fate. Some were improper used, transformed in farms, or hospitals, other almost completely destroyed. Fortunatelly, same escaped an even if were badly affected by time and indifference, managed to survived the period, and recuperated by owners. Now, rehabilitated or not, some of them are put on sale most of them using services of Artmark Historical Estate.

The most expensive building on sale is Maurice Blank palace, the former the headquarters of the United States Embassy in Romania for 70 years. The palace was home to one of the most important bankers of modern Romania, Maurice Blank, co-founder of Marmorosch Blank & Co Bank (1864), who financed the Romanian state in the War of Independence campaign. 2,500 sqm built in Neo-Renascentist style, 50 rooms and a generous garden decorated with pine trees and artesian fountain, Maurice Blank palace is an architectural landmark of the private residences in Bucharest.

The second most expensive, merchant Nicolae Hlebnikianhouse hosted the United Kingdom Diplomatic Corps functioned from 1954 until 2005. The villa was built between 1938 and 1940 according to the plans of the architect David I. Aurel for Nicolae Hlebnikian, the owner of the Hlebnikian textile factory and co-owner of the Romanian Post Office. At this time, there is a vast process of façade restoration, with all architectural elements being retained, a process completed in the spring of 2018. There is also a valid building permit for interior fittings, with which future owners can customize the interior of the house. The villa, with an area of ​​over 2,800 sqm built, has salons and rooms with generous surfaces for any type of activity, with an elevator, antiatomic shelter and many adjoining spaces.

When we speak of the beginnings of Romanian capitalism, we can not fail to mention the huge contribution that the Jewish factor had, an intrinsic community related to the Romanian banking sector. The most important names that define the Romanian banking sector as well as the Sephardic community appear in the Romanian public space at the beginning of the nineteenth century, and one of them was Solomon Halfon, who, together with the brothers Elias, Manoach or Marmorosch, would create the Romanian private banking system.

Solomon Halfon (1790-1862), the forerunner of the Halfon dynasty in Bucharest (family members were to reach both Paris and the US), ruled for some time the Sephardic community in Bucharest, supported the Revolution of 1848 and the Union of the Principalities granted to the Wallachian state and then to Romania loans that raised the economy of the country.

Nationalized in the years of communism and divided into several apartments, the house was restored to its original form after 1990. Then, in 2008, it was transformed into the Beautiful House, a multi-brand store dedicated exclusively to luxury clothing. Starting from the need to provide an elegant and contemporary backdrop to the exhibited products, but with respect to the history of the building, the works carried out during 2008-2009, under the close coordination of the Italian architect Elena Busato, are distinguished by the balance between the original features of the house and current design elements.

Built between 1919 and 1925 for Dr. Anton Dobrovici, the building is one of the most remarkable examples of residential architecture that bears the signature of Professor Duiliu Marcu, in which the Neo-Romanian inspirational plastic blends with a modernist approach to space. Historic residence with special architectural elements, located in the Ioanid park area, on Dacia Boulevard, known as the luxurious residential area of ​​Bucharest, where at the end of the 19th century and the beginning of the 20th century were built a series of buildings, today in the List of Historic Monuments, which later became embassies, consulates or representatives of renowned companies.

The elements of Romanian medieval architecture combine with the Neo-Romanian style, giving it a royal air, thanks to the well-known architect Arghir Culina, who designed the house in 1918 at the request of Aurel Mincu.