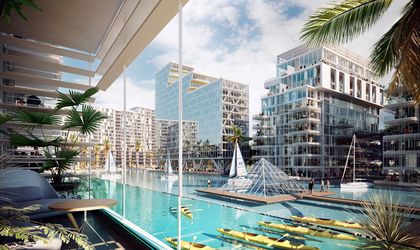 Central District Lagoon City in Bucharest, will be a large mixed development, with a residential component with 570 apartments, an office building of 8,000 sqm GLA, 5,700 sqm of commercial space, as well as a hotel with 250 rooms , all built around a 20,000 sqm lagoon, implemented under an exclusive Crystal Lagoons license.

Central District Lagoon City will be the first project in Central and Eastern Europe with self-sustaining energy efficiency through independent, renewable sources

The developer of Forty Management hired EST Hospitality Consulting to manage the international affiliation process of the hotel component of this project.

“We invited all large hotel groups that can add value to this innovative project to participate in the selection process. We are delighted by the immediate answers and the positive feedback shown by the 9 international brands that submitted offers, some for the first time for Romania. This project generated a major interest from them, some groups offering 2 brands, which shows the viability of such a special project as Central District Lagoon City, the first project in the EEC that will bring leisure and lifestyle components in the city , as a real “resort in town”, says Mircea Drăghici, CEO of EST Hospitality Consulting.

Crystal Lagoons technology, patented in 190 countries, is unique in the world and allows the development of large surfaces, covered with crystal clear water and white sand beaches, with a low maintenance cost. So far, more than 600 lagoons have been developed worldwide, and the Central District Lagoon City will use for the first time in Eastern Europe such technology, which allows residents to practice swimming and water sports, such as sailing or kayaking, among others; or simply relax on the beach without having to travel further from your own backyard.