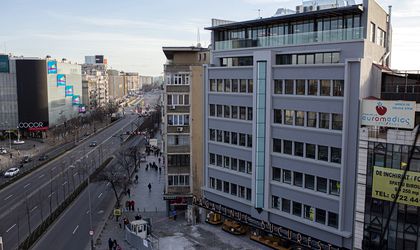 More and more old buildings from the city center get their facelifting and are ready to be put on their commercial circuit. The reconstruction of the famous Magazinul București, with a history of 90 years, has been completed, following an investment of over EUR 6.5 million. The building that maintains the specific curved glass display cases, originally integrated in the emblematic interwar period store, is designed to combine retail spaces, Class A offices and a restaurant under the same roof.

Magazinul București is located at the intersection between I.C. Brătianu and Lipscani streets in Bucharest, in an area that has over 2,600 parking places nearby, at University Square, Intercontinental, Cocor and Unirii Square. The building has a total leasable area of approximately 3,150 square meters, distributed over seven levels, which can accommodate tenants from retail, office and co-working but also services.

”90 years after the inauguration, Magazinul București is reconstructed in its original space, adapted to modern standards. The building preserves the former façade and reintroduces emblematic elements of the original architecture, modernized to suit the new design, such as the blind above the ground floor, the central glass axis to the main facade and the curved glass shopping windows, unique at the time of construction. At the same time, the new store still bears traces of its rich history, integrating original elements partially recovered during the demolitions, such as floor tiles, various ornamental metal elements from the curved windows and marble elements”, said Radu Moldoveanu, the owner’s representative of Magazinul Bucuresti in Romania.

A historical walk back to the glory days

Built in the interwar period, Magazinul Bucuresti became one of the most important shopping centers before ’89, but after the Revolution it was abandoned. In 2010, the building was given back to the heirs of the Bunescu family who built it almost a century ago, and three years later it was bought by Dutch investors Gerard Heinen and Johannes Jozefus Maria Baakman, for over 4 million euro. The two investors are part of a group of Dutch investors, who own several spaces in the historical center of the capital, thus being among the largest private owners in the area. The reconstruction works of Magazinul Bucuresti started in September 2018 and were completed in less than a year and a half.

Magazinul Bucureşti was built in 1930. Initially, it was called Popp & Bunescu, named after its founders, Bucur Bunescu and Nicolae Popp. In 1948, the building was nationalized and became Magazinul Universal Bucuresti. After 1989, the activity of the shopping center was discontinued, and in 2003 the former mayor of Sector 5, Marian Vanghelie took possession of the majority stake of SC Bucuresti SA, the owner of Magazinul Bucuresti at that time. In 2010, Magazinul Bucuresti was given back to the heirs of the Bunescu family, and in 2013 it became the property of Dutch investors Gerard Heinen and Johannes Jozefus Maria Baakman. The new owners obtained authorization for the reconstruction of the store in 2017, and 90 years after its inauguration, in 2020, Magazinul Bucuresti returns to the commercial circuit and to the urban landscape of Bucharest and continues to write history.

Discussions for space rental are already ongoing, with the real estate professional services and investment management company Colliers International being the exclusive agent.