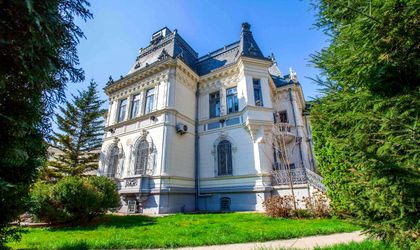 Known for 70 years as the headquarters of the United States Embassy in Romania, ​​the Maurice Blank palace in Bucharest’s Tudor Arghezi Street no. 9 will be auctioned by Artmark Historical Estate. The starting price is EUR 5,500,000.

The palace was home to one of the most important bankers of modern Romania, Maurice Blank, co-founder of Marmorosch Blank & Co Bank (1864), who financed the Romanian state in the War of Independence campaign.

The building was designed by the famous Swiss architect Louis Pierre Blanc, who left his mark on other important Romanian public buildings such as the Palace of the Ministry of Agriculture, the Palace of the Faculty of Medicine, the Iasi University Headquarters or the Victor Babes Institute.

2,500 sqm built in Neo-Renascentist style, 50 rooms and a generous garden decorated with pine trees and artesian fountain, Maurice Blank palace is an architectural landmark of the private residences in Bucharest.

In 1934 the palace was bought by the lawyer and politician Eduard Mirto, who was to be the last rightful owner until the coming of communism.

Eduard Mirto is the one who initiated the ties between Blank Palace and the US Embassy, ​​leased the property to the Americans right on the verge of the outbreak of the Second World War. The palace remained, until 2011 the famous US Embassy, ​​re-entering the private circuit today.