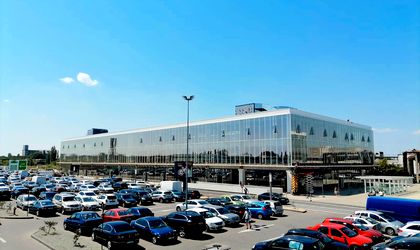 Following the opening of the second phase of Electroputere Parc and the upcoming completion of the Electroputere Mall new extensions, Catinvest announces new stores, taking the total number of brands over 200 and consolidating the commercial centre’s position as the main shopping destination in Oltenia.

Catinvest continues to diversify the shopping offer in Electroputere Mall in the coming period, with new stores, from brands such as Buzz, Colin’s, Kigili, Sportvision, Gorilla Gym, My Geisha, Gant, Candy Cat or DM Drogerie Markt to name a few. It will also increase the attractiveness of the food court area in the coming weeks with the opening of new restaurants Chopstix, Cartofiserie and Burger King. A new 1.000 square metre outdoor terrace is also about to be inaugurated, offering to the clients of the 23 restaurants operating in Electroputere Mall more than 300 outside sitting places.

“Electroputere’s success grows with each new opening. With more than 200 stores, our customers find at Electroputere a complete offer and the best brands in fashion, sports, home equipment, restaurants and entertainment. We are grateful to our partners for their trust and we are making sure we deserve it by investing in the expansion and development of this great shopping area”, said Jibril Semour, General Manager of Catinvest Eastern Europe.

”Since its 2016 acquisition, Catinvest has more than doubled the size of Electroputere. However, we do not intend to stop there, quite the contrary. We are glad to announce the start of work on EP Residence before the summer. EP Residence will bring to the area a complementary offer with more than 60 apartments in a high-end hotel regime. The next step, planned for early 2023, is currently being authorised. All I can reveal now is that it’s gonna be spectacular and will bring more than 45,000 square metres of additional retail and office space to Electroputere”, adds Bertrand Catteau, President of Catinvest Group.

The French real estate group Catinvest also owns and manages several shopping centers in Romania – Carrefour Orhideea and Cora Pantelimon in Bucharest and Carrefour TOM in Constanta – as well as in Eastern Europe – Auchan Savoya Park in Budapest and Tesco Borska Pole in Plzen. Catinvest is also active in France in residential and shopping centres activities. In total, Catinvest owns and manages more than 525,000 square metres of spaces in France and Eastern Europe.