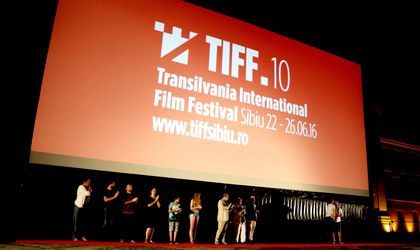 The 10th edition of the International Movie Festival Transilvania (TIFF), in Sibiu, closed on June 26. This anniversary edition attracted over 15,000 spectators.

The spectators attended 50 screening, 4 special events and met more than 25 guests in Sibiu. Events held in Piata Mare registered a peak of audience, attracting over 2000 spectators every evening.

The festival closed in Piata Mare with the projection of “Adventures of Nelly”, a Romanian-German co-production filmed in Sibiu and tells the story of a German teenager and its adventures while spending her summer in Romania with her parents. The main characters were played by Flora Li Thiemann and Hagi Lacatus, who were the stars of the evening together with the director Dominik Weselly, German producer Arek Gielnik, Romanian producer Bogdan Craciun, screen writer Uta Kolan and actor Hannes Hochsmann.

„We chose to make the film in Romania because it was here that the story was born, it has to do with the experience of the two screen writers who came to Romania in the 80’s and wanted to tell the story of the places they saw. We all fell in love with this country and we are glad that we succeeded to make the film here. It’s wonderful to be here tonight, ”said Weselly.

There was also the projection of the movie “Dogs”, directed by Bogdan Mirica, the big winner of Transilvania Trophy 2016.

In the second evening, Dorian Boguta, Dragos Bucur and Alexandru Papadopol cheered the spectators with the adventures from “Doua lozuri”, directed by Paul Negoescu, while the third evening brought the football fans in Piata Mare for the projection of the movie “Pele: The birth of a legend.”

On Saturday, actress Tamara Buciuceanu-Botez was celebrated, whose career in theatre and cinematography spans over 60 years, received the prize of excellence for her artistic activity from TIFF president Tudor Giurgiu.