The most important office lease transactions in Q2 2018 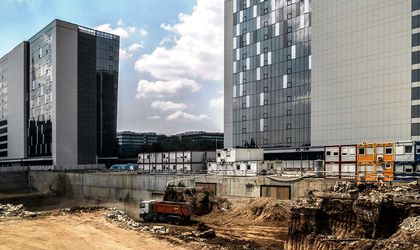 The Globalworth buildings, Skanska’s Campus 6 and Forte Partners’ The Bridge II (acquired by Dedeman a few weeks ago) were the most requested office buildings in Bucharest and signed the most lease pre-contracts or contracts.

According to brec.ro (the Bucharest Real Estate Club’s website), the most important lease transaction was a pre-lease signed between Globalworth and Mindspace (a workplace solutions company) for 12,000 sqm in the Globalworth Campus.

Moreover, as part of their collaboration, Globalworth will become Mindspace’s shareholder by investing USD 10 million in the company. By entering the Romanian market, Mindspace is expanding its portfolio to 28 locations in Europe and the United States, active in 7 countries and 13 cities. Chinese telecoms equipment maker Huawei has renewed its office lease deal in Lakeview, in a deal brokered by CW Echinox. The property is a landmark building in Bucharest’s most dynamic business hub from Barbu Vacarescu – Floreasca.

The building was one of the first developed in this location by AIG Lincoln & Fabian, sold in 2013 to NEPI Group. It has a lettable area of 25,600 sqm and an occupancy rate of 98.8 percent.

Industrial group Thales has pre-leased 5,300 sqm in CA Immo’s Orhideea Towers, which is to be delivered this year. The deal was brokered by JLL. The two towers of the project will have 13 and 17 floors, with surfaces up to 2,700 sqm per floor and two underground floors each.

The property is located in the Center-West sub market, a key location for the Austrian investor, which has acquired earlier this year Campus 6.1 from Skanska in the area.

Schlumberger, the biggest technology supplier for oil and gas industry, has signed a pre-lease deal with Forte Partners for 4,500 sqm in the second phase of The Bridge project. The deal was assited by CBRE. Schlumberger will open a shared services center on the premises.

The second phase of the The Bridge will be delivered in the first part of 2019. The project located near the Basarab overpass, in the Center West submarket, was recently sold by Forte Partners to Dedeman in what became the biggest transaction of 2018.

The fourth place is occupied by two deals in the same building, as Medicover has pre-leased in Q2 4,500 sq.m in The Bridge 2, in order to bring together under the same roof all of its entities: Medicover, Synevo, Synevo Central Lab Clinical Trials and Software Development Competence Center.

The company will open a clinic on an 840 sqm area at the ground floor of the building, while the rest of 3,700 sqm will host the management and operational teams of the company’s group.

CBRE advised London Stock Exchange Group (LSEG) in the leasing transaction of a 3,000 sqm office space for a new Business Services Centre in Bucharest. The center will open later this year in Skanska’s Campus 6.1.

The building is located in the Central-West area of Bucharest, near the Polytechnic University, a strategic location chosen by the British company. LSEG will initially employ 200 people across a range of roles.

Spaces leased 3,000 square meters of office space in Unirii View and will open in the autumn of 2018 its first business hub located in the central area of Bucharest. The deal was brokered by CBRE. Spaces is characterized by a modern and creative design, materialized in unique working environments that enhance the entrepreneurial spirit.