Successful story: The restoration of The Mincu House 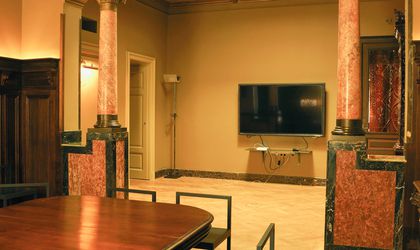 History of the house*: According to the official documents, the building had a unified design, characteristic of residential architecture in Bucharest during the second half of the 19th century. It initially took the form of an L-shaped, ground floor-only building, with one main volume reserved for the family and linked through a corridor to a secondary volume that held the annexes, notes Igloo architecture magazine. According to the Chamber of Architects in Romania (OAR  ), in 1890, Ion Mincu bought the house from Burelli and remodeled it. He redecorated the interiors, redid the facades and added an extra level to the annex volume. On this occasion, the facades were equipped with new frames for the windows and doors, belts and cornices, profiles and pilasters, all similar in character to the ones used on the facades of the Central School for Girls. Although, in principle, the original layout of the interior spaces was kept, Mincu redecorated every room, transforming it, “little by little into the style so beloved by him.” Bronze chandeliers, “old sheepskin coats and Karamanlî rugs covering the waxed floors or hanging on the walls,” paintings and wood-painted icons, stained-glass windows and mirrors with frames of “maple sculpted in Arabian motifs,” sofas and armchairs, oak paneling and ceilings crossed by wooden beams, walnut furniture and many other precious objects, all making up the interior imagined by Mincu for his family’s benefit. After his death, the construction was never modified, nor was it, however, significantly repaired. The plane layout and functional circulations designed by Burelli and then by Mincu were, however, altered in the period that followed 1948, as the space was held off from its heirs and new tenants took their place.

Special report: Bucharest patrimony buildings that got a nip/tuck | What are the players in the EUR 100 million market

Patrimony drama: The case of the Assan Mill in Bucharest

The restoration process*: It was 2000 when the president of OAR, architect Sterban Sturdza, was looking for a new space for the institution he was in charge of. This is how he found the Mincu house. He convinced the descendants of the great architect to sell the building to them, although there was a pre-agreement with another company which wanted to build an office building there and to demolish part of the house. According to Igloo magazine, the Ion Mincu house was acquired by the OAR in stages, through donations, subscriptions and personal contributions. Although its function changed as the house became an office building accompanied by spaces open to the public, the layout, surroundings and plant life were all preserved and capitalized on. The restoration intervention spanned across a lengthy period of time and, contrary to usual practices, began with the decorative elements. At the very start of the works, the original frescoes of the house were uncovered, having been coated over with Mincu’s own redecorations. Once the coating was removed, they were cleaned and fixed after more than a century and now remain visible, marking an important stage in the material evolution of the house. All of the painted details were restored, along with the wooden paneling and woodwork elements. Every detail, including the furniture, still abides by the past image of the house, preserved in photographs in a monograph written by Nicolae Petraşcu in 1928. The only interventions involving contemporary technologies are the isolations, ventilations and heating installations.

*information provided by Igloo and the Chamber of Architects in Romania