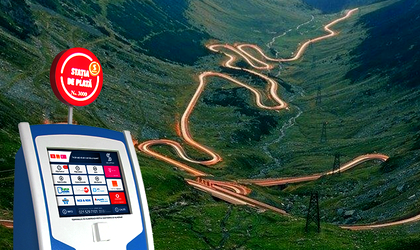 Moreover, this year saw a 11 percent increase in the total number of vines sold during the summer compared to the same period last year.

”The holiday period translates into pay-area terminals with larger budgets for holiday-related services, such as flats and airplane tickets. Seasonal growth is also seen in the preferred product type, ie the flats that are valid for a short period of time, ”said Adrian Badea, CEO of SelfPay.

The number of vignettes sold through SelfPay payment stations reached 361,000 in the first eight months of 2018, up 20 percent over the same period last year.  Cars have the highest share in the total vignettes sold through the pay stations, 257,000, the remaining 104,000 being vignified for cargo and minibuses, according to the analysis for the first eight months of the year.

The best-selling vignettes are for 7-day, with 188,000 sold through SelfPay pay stations in the first eight months of 2018, compared to 160,000 in the same period last year. The 12-month winners are ranked second in the best-selling flats, followed by the 30-day and 90-day ones.

SelfPay SelfPay owns the largest network of self-service payment stations, located in over 750 localities in the country.