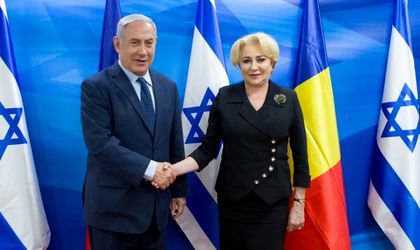 Romanian prime minister Viorica Dancila met with Israeli prime minister Benjamin Netanyahu today as part of her official visit to Israel. According to a statement by the government, Netanyahu praised the Romanian government’s launch of a debate regarding the possible relocation of Romania’s embassy to Jerusalem.

PSD leader Liviu Dragnea also went to Israel with the prime minister, after having expressed his support for moving the embassy, which caused controversy in Romania in the past week.

The statement also said that the two PMs talked about organizing the third common high-level government meeting (G2G) in 2018, as well as about “cooperation in the military, strategic and cybersecurity fields”.