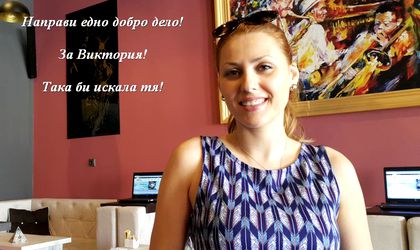 Bulgarian investigative journalist Victoria Marinova, who was brutally murdered on Saturday, interviewed on her last show for private television channel TVN a Romanian and a Bulgarian journalist working on a project called Exposing Fraud in EU-funded Projects in Romania and Bulgaria. Prior to TVN interview’s broadcast, the two had been detained by the Bulgarian authorities, while trying to prevent the destruction of evidence that supported their case.

Victoria Marinova (30), a Bulgarian investigative journalist who presented a current affairs talk programme called “Detector” for private television network TVN, broadcasting out of Ruse, was brutally raped and murdered on Saturday. The last show she presented, which was aired on September 30, featured two journalists who were investigating several politicians and businessmen for alleged corruption of EU funds.

The two journalists, Romanian Attila Biro, editor of the Romanian investigative site Rise Project, and Dimitar Stoyanov, from Bivol, a Bulgarian investigative news website, were working on an investigation as part of  the project “Exposing Fraud in EU-funded Projects in Romania and Bulgaria.” Prior to the interview being aired, the two journalists were also briefly detained by Bulgarian police. On September 13, the two were detained near Radomir, a town about 35 km west of Bulgarian capital Sofia. According to the Bivol.bg website, the journalists, who are part of the investigative reporting platform Organized Crime and Corruption Reporting Project (OCCRP), were detained while trying to prevent destruction of evidence of fraud involving European Union (EU) funds.

The two were working on a joint project funded by the European Centre for Press and Media Freedom (ECPMF) and the International Press Institute (IPI) via newly launched initiative, the IJ4EU, designed to support cross-border investigative reporting in the EU. In June 2018, the fund provided the two investigative websites with EUR 38,000 “to investigate fraud, money laundering and corruption patterns used by organized crime groups in Romania and Bulgaria and the unseen links that unite them.”

Watch the video of the latest episode of Detector, which was aired on September 30.

According to Bivol.bg, on September 13, Stoyanov and Biro were detained by the Bulgarian police while at the site where evidence of fraud using EU funs was being destroyed. The documents, which had been set on fire near he village of Radomir, belonged to the GP Group, a company that, the investigation showed, was involved in fraud involving EU funds.

“Bivol’s editorial office asked Dimitar Stoyanov and Attila Biro take pictures of the destruction of the documentation that proved to be related to European projects. Bivol’s editors also notified the Ministry of the Interior because at a preliminary meeting earlier in the day the Ministry announced that after the publication, they had started looking into the case,” Bivol.bg writes.

“When Stoyanov and Biro reached the crime scene – the site where documents had been burning, they found many large thrash bags with shredded paper sheets and burning folders with documents from European projects. Some of them had signatures and seals,” the article reads.

“At that moment the journalists were detained by two policemen in a patrol car belonging to the police directorate in the western city of Pernik. The officers with armored vests and handguns ordered them to lie down on the ground. Then the two journalists were handcuffed and their phones confiscated.”

Read more about
REI Finance Advisors: Profitable companies can get up to EUR 200,000 of EU “Grants for investments”
read more

The two were released with no charge hours later.

According to Ruse regional prosecutor Georgy Georgiev, Ms Marinova had suffered blows to the head and was suffocated in the attack. Also, at the moment she was found in a park in Ruse, Marinova’s “mobile phone, car keys, glasses and part of her clothes were missing”.

According to Interior minister Mladen Marinov, there was no evidence to suggest the murder was related to Marinova’s work: “It is about rape and murder,” he said, quoted by The Guardian. He also added that there was no information that she had been threatened.

Bulgarian Prime Minister Boyko Borissov also said: “The best criminologists were sent to Ruse, let’s not press them. A large amount of DNA had been obtained.”

However, Bivol.bg owner Asen Yordanov told AFP that his website had received credible information that its journalists were in danger of being assaulted because of their involvement into the investigation that also appeared on Detector, the show Marinova was presenting.

“Viktoria’s death, the brutal manner in which she was killed, is an execution. It was meant to serve as an example, something like a warning,” Yordanov added.

“With great pain and insurmountable grief the TVN’s team is experiencing the loss of our beloved colleague Victoria Marinova and we pray for sympathy to the sorrow of her relatives and colleagues,” TVN said in a statement.

On Monday evening, at 18.30, vigils will be held in Ruse, as well as in the Bulgarian capital Sofia and cities Plovdiv, Stara Zagora and Silistra, the website of the TVN television announced.