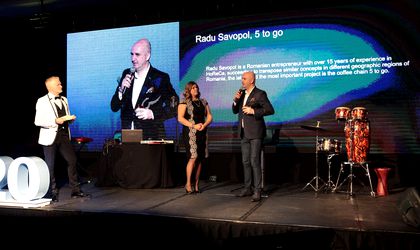 A serial entrepreneur, Radu Savopol has nearly 20 years of experience in HoReCa and, with the creation of coffee chain 5 to Go, has managed to put a mark on many Romanians’ mornings. Through the expansion of the chain he has managed to successfully transfer the concept to several regions of Romania.

Last year, the coffee chain increased its turnover by 134 percent year-on-year. He successfully juggles several businesses and last year both closed a long-running venue in Old Nick Pub and took on a fresh challenge by opening a new space aligned with the latest market trends.

Among last year’s biggest achievements for the 5 to Go chain, Savopol counts the fact that it exceeded its forecasted turnover. “Moreover, we opened cafes in new cities and strengthened the brand in several areas around the country. In 2017 we also launched 5 to Go plus, a double range of drinks and premium for the food range. We also focused on developing the 5 to Go team.”

“For me, it was a good year, due to the launch of Dialog Social Bar, but also one when I gave up on a staple location in Bucharest, Old Nick Pub Bucuresti,” he acknowledges. “I focused on the team, on strengthening the franchises with potential in the management of own locations, and I created private label products, which meant I had to put in a lot of work and a lot of kilometers.”

At Business Review Awards 2018, Radu Savopol was named Emerging Entrepreneur of the Year.