Individual tickets for Enescu Festival 2017, up for sale starting February 16 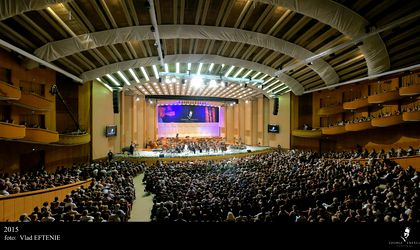 The individual tickets for Enescu Festival 2017 will be put on sale, on February 16, in the Eventim network, both online, on www.eventim.ro site, as well as in Eventim stores from the entire country (Germanos, Orange, Vodafone, Diverta, Carrefour, Humanitas libraries and Carturești, OMV stations). Over 3,000 artists worldwide will be present in Bucharest and in other seven cities within 80 events, at the 2017 edition between September 2-24.

The Enescu Festival will put in a new light the music of George Enescu., with a new director, Zubin Mehta, honorary president and Vladimir Jurowski, artistic director. The Festival will make the most of the music and artistic creativity through technology, bringing a new approach and will bring forward the contemporary music.

It will bring the music of XXI century, during the International Forum of Composers where 30 of the most contemporary composers will come, such as Sir James MacMillan, Rodion Shchedrin, Jörg Widmann and Magnus Lindberg. The public will follow debates on current themes, where the access is free, based on registration.

Within the Festival, Imaginary will take place for the first time in Romania, this being an interactive exhibition about math and music.