Funeral of King Michael I: Tens of thousands of people say goodbye in Bucharest 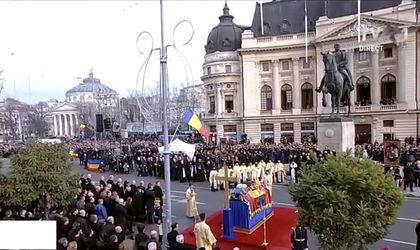 Tens of thousands of people in Bucharest were on the route of the funeral procession of King Michael I.

The people clapped their hands and shouted “King Michael”, “The Monarchy Saves Romania” and “Down with the communists”, according to News.ro.

A religious service for the king was carried out by Romanian Patriarch Daniel at the Patriarchy Cathedral in central Bucharest.

The king’s coffin will be transported from Bucharest to Curtea de Arges with the royal train. The burial ceremony will take place this evening at the New Archbishopric and Royal Cathedral.

President Klaus Iohannis, PM Mihai Tudose, the president of the Senate and Chamber of Deputies, ex-president Emil Constantinescu, diplomats, representatives of religious cults and officials from dozens of royal houses across the globe attended the funeral ceremony of King Michael I. The monarch passed away at 96 in Switzerland earlier this month.

Three days of national mourning were declared in Romania following the death of King Michael.