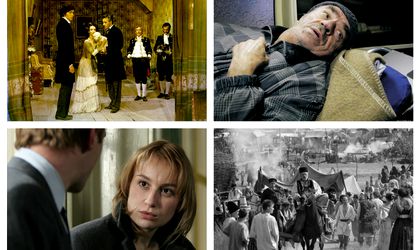 The late Liviu Ciulei directed this drama about war and nationalism, the first Romanian film to come to international prominence.

Young miscreants are made to restage a brawl for a public service film in Lucian Pintilie’s mockumentary.

With a running time of close to three and a half hours, the late Sergiu Nicolaescu’s historical epic focuses on the Wallachian ruler’s mission to reunite Romanian’s principalities.

Love and money are up against each other in the late Iulian Mihu’s movie, in which impoverished medical student Felix falls for Otilia.

Picking up after the death of Michael the Brave, Nicolaescu continued his historical filmmaking with this tale of a band of the Prince of Wallachia’s soldiers who wander Europe on their way home.

Daneliuc wrote, directed and starred in this drama about young workers rewarded for their performance with a Danube cruise.

Heavyweight Romanian actors Victor Rebengiuc and Luminita Gheorghiu star in Stere Gulea’s drama, based on a novel by Marin Preda.

After her father’s death, a schoolteacher embarks upon a journey, both literal and spiritual. Pintilie’s movie has comic moments, despites its dark episodes.

Nae Caranfil’s tripartite story covers the same events from the differing viewpoints of a student, a soldier and a theater actor.

In Cristi Puiu’s directorial debut, a struggling young man from Constanta finds himself out of his depth when he embarks on a dubious errand.

A dorky schoolteacher and wannabe writer falls in with prosperous conmen in Caranfil’s black comedy.

Western-influenced, Radu Jude’s drama, set in 19th century Wallachia, sees a boyar set a policeman on the trail of a gypsy slave involved with his wife.

Puiu returns to familiar themes, as a middle-aged doctor meets with family members to commemorate his recently deceased father.

With thanks to film writer Alin Ludu Dumbrava (aldmovieland.blogspot.com) for his help with the selection.