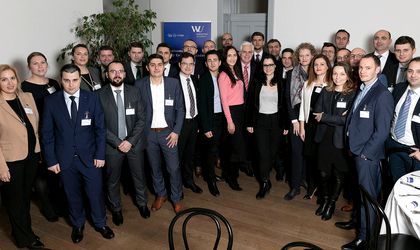 The creation of a co-living space for London and the launch of a fully organic tea product were some of the initiatives presented by Romanian students of the Executive MBA Bucharest program held by WU Executive Academy.

Business Review is in Vienna to see the projects prepared by the Romanians under the entrepreneurial capstone project. This is a key component of the Executive MBA Bucharest. The students are challenged to develop a business plan for entrepreneurial projects such as the entry on a new market, launching new products or creating a business plan for a successful start-up.

Alina Andrei, founder of ‎Cabot Transfer Pricing, presented with her colleague the expansion strategy of Macedonian PET flakes producer Pavor to Bulgaria. She worked on this project with Alexander Brazhev.

“I think it’s quite a good idea for business in general because this is the future. It’s a sustainable sector and the focus will be more on this. I think there is a big potential on this market for PET recycling and we had this idea of producing 100 percent biodegradable plastic. However, we did not receive the information that we needed from the Polish producer that was doing that so we went actually with a back-up plan to do the capstone project for traditional plastic, not the 100 percent biodegradable one.

Asked if she wants to turn this idea into reality she said, “Yes”.

“The capital expenditure is quite a low one. Even if it’s a production facility, the initial capital isn’t very high figure,” she told BR.

Claudiu Hila, general manager, Pallex Romania, presented with his team the market introduction of a 100 percent organic ready-to-drink tea product on the Austrian market called TiiJoy. He worked on this project with Jorg Six and Cristina Nedelcu.

“It was a brainstorm to choose from many ideas and many different segments and we reached this point related to sustainability, fairness and healthiness.

We are thinking to implement it but we are still debating this because the main problem is financing. There is that statistics showing that 80 percent of start-ups are failing in the first couple of years, so there is a big risk of failure,” he told BR.

Alexandru Bold, founder at Bold Development, presented with his team a co-living concept for London. He worked on this project with Liliana Libocor and Mihnea Craciun.

“We went at an intersection of various industries. It’s not just real-estate, it’s an experiential business and we started from the idea of uniting people and bringing technology on how to leverage this new technology in the world.

The we looked at all the buildings that are not used to their full potential and they’re just being wasted and we started from the idea of taking one of those buildings and refurbish it and employ top architects so we can have a plan to unite all these dimensions.

We plan to start the business. We currently have all the calculations. Indeed, it would probably be easier to do it in Romania and we are looking for potential investors that could finance real estate developers that would work with us and architects that are able to create this top notch idea and to put into practice,” he told BR.