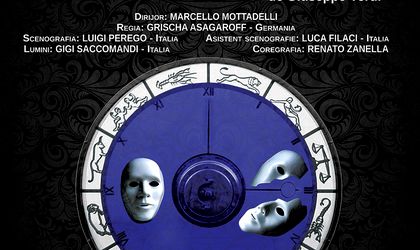 At the beginning of April 2017, the Bucharest National Opera surprises its audience with a new premiere, the opera A Masked Ball by Giuseppe Verdi, which will take place on April 8 and 9.

According to the official press release, the performance is directed by Grischa Asagaroff, while the choreography belongs to the artistic coordinator of the ballet corps of the Bucharest National Opera, Renato Zanella,. Scenography is designed by Luigi Perego, while Gigi Saccomandi did the light design. For this premiere, the conductor will be Marcello Mottadelli, currently the musical artistic coordinator of the Bucharest Opera.

“On stage, we used a lot of symbols, but the story is essentially the same. (…) we move the action in the 30s, something that is more reflected in the costumes, but as setup, it can take place anywhere in the world, (…) but the scenography sets can be place in any place because the story is universal, it transcends time and places,” explained the director Grischa Asagaroff.

In Verdi’s A Masked Ball, a King is conspired against, and is ultimately betrayed by his most trusted friend. This rich theatrical tapestry is woven of illicit love, a fortune-teller, a masked ball, and as many vows of vengeance as can be packed into three hours. Verdi’s much-loved work is Italian opera at its very best, with thrilling arias, glorious choral music, and the dramatic intensity that only great opera can provide.

Tickets can be purchased on the Bucharest’s National Opera’s website or at their ticket office.