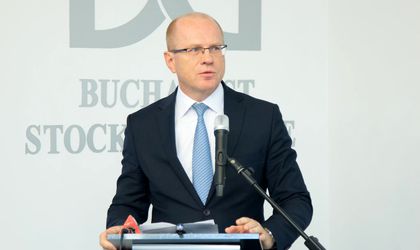 With Ludwik Sobolewski at the helm of the Bucharest Stock Exchange (BVB), the Romanian capital market last year saw the first initial public offering (IPO) of a private company in close to a decade, underlining the Pole’s strategy to open the market to entrepreneurs and smaller Romanian firms.

Ever since he took the helm of the BVB in 2013, Sobolewski has argued that the Romanian capital market should act as an alternative financing option for companies in growth mode, but also for Romanian entrepreneurs looking to gain visibility for their firms.

Last year, the value of deals on the BVB rose by 3.6 percent to over RON 9.1 billion versus the previous year, while on the alternative trading system, share transactions rose by 128 percent to RON 206.8 million.

Although no IPOs of state-owned companies happened last year, there was the listing of MedLife, the private healthcare services provider founded by the Marcu family. The company was able to sell a 44 percent stake for EUR 50.8 million.

The AeRO market, which targets SMEs and startups, continued to develop last year. The whole concept of the special market for smaller companies had been promoted by Sobolewski while he was head of the Warsaw Stock Exchange, where it attracted hundreds of issuers.

Right now, Sobolewski is working to consolidate the community of retail investors in Romania, through special events and financial education initiatives, and his team has been working with the Financial Supervision Authority (FSA) to remove some trading barriers.

One of Sobolewski’s main targets is to take the local market to emerging status, which would bring a new category of high-profile investors onto it. This could happen if state-owned energy producer Hidroelectrica were listed on the BVB, but the public authorities have not yet said when this could happen.

Meanwhile, under his mandate the BVB has started to actively look for “hidden gems” in the tech sector – young companies with the extensive growth potential that could represent good investment destinations for local investors. However, this could prove to be a tough nut to crack as most of the startups born in Romania in recent years achieved success when they set up in the UK or USA. Moreover, the coveted startups in the tech industry have preferred to remain private and an IPO is not really entrepreneurs’ main aim.

Another step that brought retail clients closer to the stock exchange was the launch of state bonds, in an offering that was oversubscribed. The Ministry of Finance raised RON 735 million, way above the RON 100 million it had initially planned to net from the sale. In three weeks of the offering, 20,185 retail clients bought state bonds, up 16-fold compared to the auction of the previous year.

Going forward, Sobolewski’s plan could revolve around the continuation of current initiatives. This will mean intensified efforts to get more IPOs from private companies, the attraction of startups onto the AeRO market, and the growth of the retail investor base.

But these strategic goals need the support of all stakeholders, including the public authorities, which haven’t paid enough attention to the capital market in recent times.

The Bucharest Stock Exchange (BVB) registered a net profit of RON 7.87 million in 2016, up by 19 percent on 2015, on the back of growing revenues and a reduction in costs.