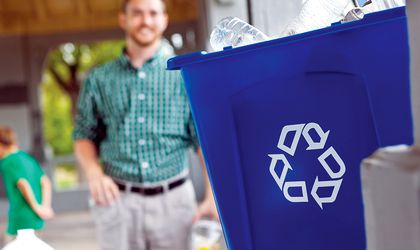 Romania faces one of its most challenging environmental issues as it risks the infringement procedures for failing to reduce its stored waste by 50 percent by 2020. It is liable for penalties up to EUR 200,000 daily starting in 2021, if the targets imposed by the EC are not achieved.

The most recent problem is that, despite having passed legislation requiring landfill owners to pay a landfill tax, implementation has continually been postponed, with the Romanian Government recently announcing a further postponement until January 1, 2019.

“A landfill tax applied on stored waste would encourage a decrease in the volume of waste deposited in landfill sites. This could lead to new initiatives focused on waste prevention, reuse and recycling,” says Geta Diaconu, director of the sustainability consultancy division at KPMG Romania. She adds: “This legislation would be very beneficial, since the tax would inevitably be passed on to businesses and individuals encouraging them to take advantage of more environmentally friendly methods of waste disposal, such as selective collection/recycling,” adds the KPMG representative.

The waste reduction targets are part of the EU action plan for the Circular Economy and aim to achieve, among other key elements, a common EU recycling target of 65 percent of municipal waste by 2030 (currently Romania recycles around 5 percent of its waste).

According to the Romanian Coalition for Circular Economy, the total implementation of the existing legislation on waste management could generate over 34,000 additional jobs and would increase the annual turnover of the waste sector by more than EUR 3.6 billion. The Romanian Coalition for Circular Economy is a private initiative that comprises 106 companies with over 14,000 employees and a cumulated turnover of over RON 5 billion.

At present, Romania uses the method of storing the waste collected, a method used for decades that has a crucial negative impact on the environment, pundits say. “Romania is the only country in the European Union that encourages landfills. At present, the infringement procedure for miscarrying the reducing of stored waste by 50 percent by 2020 cannot be avoided,” says a press release of the Romanian Coalition for Circular Economy. According to Diaconu, the two infringement procedures on waste management that were initiated against Romania in February and April of this year are very sensitive and the process is quite advanced, as the European Commission has referred Romania to the European Court of Justice. The first relates to delays in the closure of 68 non-compliant landfills and the second concerns Romania’s failure to adopt, at national level, measures on waste management and waste prevention.

The authorities have started to implement measures, as well as to communicate their progress to the European Commission (EC). “Several landfills subject to the infringement proceedings have been closed, and for another six, the closing process has been initiated. In relation to the second infringement procedure, the draft of the 2014-2020 National Waste Management Plan (NWMP) has been disclosed for public consultation and the EC has also been informed about this,” says Diaconu.

In such a challenging context, dominated by the pressure for meeting the European Commission targets in terms of waste management, the rapid development of modern infrastructure for separate waste collection is needed. Furthermore, the effort needs to be coordinated with intensive public awareness campaigns in order to achieve the waste recovery and recycling targets.

An example in this direction is the move made by the general councilmen within the town hall of Bucharest at the end of August, who gave their approval for installing 52 units for selective collection of recyclable waste in Bucharest. The project will be implemented in partnership with Green Group, through Total Waste Management. The units will be able to collect PETs and other plastics, cans, bottles, home appliances, batteries and used oil. Also, the institutional lenders are willing to support the improvement of waste management on the local market. For example, the European Investment Bank (EIB) will lend EUR 7.5 million to GreenFiber International, an arm of Green Group, to finance a recycling and circular economy project. The project will create some 280 jobs and will increase the volume of collected and processed waste by more than 50,000 tons/year.

Romania has set a first step for packaging optimization through redesign, for which the private sector is primarily responsible. “Economic operators are encouraged to rent reusable packaging materials such as the wood pallets, instead of buying new ones. In this way, the target of reduction of wood packaging by 15 percent by 2020 may be feasible. Moreover, as part of the Waste Prevention Plan, starting from 2018, a mandatory deposit system for secondary and tertiary wood packaging and a single deposit amount could be introduced into Romanian legislation,” concludes the representative of KPMG.

New appointments at management level at KPMG in Romania