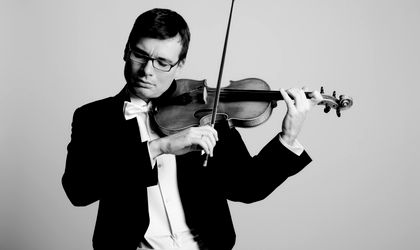 Violinist Alexandru Tomescu will perform during the fifth edition of the “Magical Summer” festival at the Romanian Athenaeum on July 20 from 19:30.

As part of the concert, the Romanian violinist will perform Bela Bartok’s sonata for solo violin Sz117 and the Violin Partita No.2 in D minor, BWV 1004 by Johann Sebastian Bach.

In September 2007, Alexandru Tomescu has won the right to use the famous Stradivarius Elder – Voicu 1702 for five years, which is considered to be the most well-preserved Stradivarius musical instrument.

The fifth edition of the “Magical Summer” festival is organized by Lanto Communication and will be held at the Romanian Athenaeum between July 13 and August 24. The concerts are organized every week, during which famous artists, such as the Romanian Youth Orchestra, Portugal Youth Orchestra, Junior Orchestra and the Sinfonietta Orchestra will perform concerts together with well-known conductors and soloists.

Tickets and full passes can be purchased online on www.bilete.ro and at the Romanian Athenaeum ticket booth.