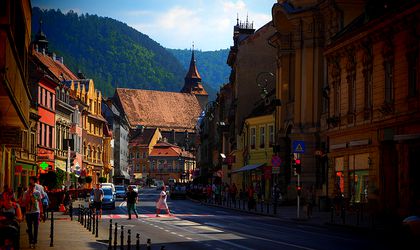 Brasov is one of the most visited cities in Romania. A 2-and-a-half hour drive from Bucharest, the city could not be more different. Surrounded by mountains, it offers fresh air, a vibrant restaurant scene, ski slopes and a beautifully preserved old centre.

Brasov’s old centre is the best place to start your exploration of the city. A gathering spot since 1364, the square hosts all important events taking place in the city, such as concerts and fairs. The colourful buildings that surround it host terraces and restaurants and the Council House, one of the most important landmarks, dates from the 15th century. One of the most famous landmarks in Brasov, the Black Church is the main Gothic monument in Romania. Built between the 14th and 15th centuries, it got its name from the Great Fire of 1689, which blackened its walls. This ancient church has seen history unfold inside of its walls. Having started as a Catholic church, it changed into a Protestant one during Reformation. Brasov has a lively restaurant scene, offering from delicious traditional food, served at Ceasu’ Rau or Sergiana, to food grown locally served by Bistro de l’Arte in menus that adapt to the seasons, as well as several foreign cuisine restaurants.

Poiana Brasov is one of the most popular ski slopes in the country, and can easily be reached from Bucharest. The 23.9 km slope attracts thousands who come for skiing and snowboarding from the first snow and until spring.

For great views over the city, climb the 400 meters Tampa Mountain. Also hosting a butterfly reservation, the mountain is home to the iconic Brasov sign. The most stunning example of medieval architecture is Catherine’s Gate, the access gate to the medieval city.  Its five spires warns visitors that the death penalty could be applied in the city for crimes. Built in the 16th century, it was used by native Romanians to enter the city, ruled by German Saxons. For a one day trip, head one hour away from Brasov to Piatra Craiului Mountains, for hiking, the freshest air and pristine nature. History and culture lovers will appreciate a visit to Prejmer fortified church, a World Heritage Site located 15 kilometres away from the city. Not least, animal lovers will enjoy a visit to the Libearty Bear Sanctuary, a welcoming home to 70 rescued bears.

Head to Dealul Cetatii for a visit to Cetatuia Brasovului, a 17th century fortress that currently serves as a tourist centre. Bran Castle, one of the most famous and picturesque castles in Romania, is also in Brasov’s vicinity, and can be reached in less than half an hour’s drive.