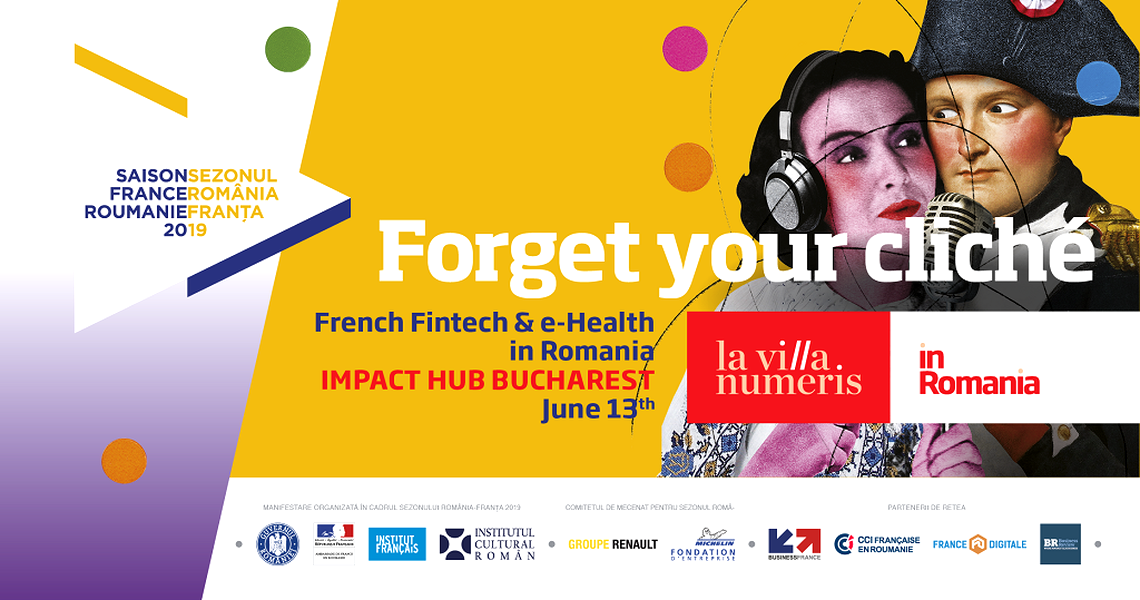 La villa numeris organizes this spring a series of events and conferences in the framework of the France-Romania season 2019. A great opportunity to nurture our European vision of digital, through cooperation between French and Romanian actors of the sector.

A crossed season to celebrate the Franco-Romanian friendship

Romania, which celebrated its 100 years of existence last December, has been ensuring the Presidency of the European Union since January 1st.

It is in this strategic context that France and Romania wished to organise a crossed season, which took place in France (Romanian season) until April 16th 2019 and then in Romania (French season) from April 18th to July 14th 2019.

Beyond the historical context, the long-standing Franco-Romanian friendship, and the richness of the ambitious cultural programming planned in the two territories, this crossed-season is also very much participating to the strengthening of the economic links between the two countries.

These challenges haven’t failed to be recalled at the Franco-Romanian Economic Summit held in Bercy last December: with 2300 French companies present on Romanian soil, France is today the 5th trading partner of Romania. While these exchanges are first generated by CAC 40 companies, the expansion of this cooperation is now more based on SMEs.

Strengthening cooperation in the digital sector

In this context, digital is certainly one of the most promising sectors. Romania, which has one of the lowest unemployment rates in Europe, is a very dynamic and highly competent digital challenger, endowed with engineers of great talents, but this reality is still poorly known by French companies.

And while France is now experiencing unprecedented growth in its digital sector backed by record investments, this momentum is still too often overshaded in Romania by a very classic vision of France, which is embodied first through the great French historical and cultural figures, which Romanian people discover during their high school, when they choose to learn French.

For Jean-Jacques Garnier, Commissioner-General of the season, French side, «Romania has a technical competence recognized for a long time by a number of French companies, but Romanian creativity in digital deserves today a real spotlight. As for the French dynamism in digital, it’s now poorly known to the young generations of Romanians, who have an image of France anchored in the years 80/90. But this dimension is very important if we want to maintain the flame of the Francophonie in Romania with the 15-35 years old.»

Based on our European convictions, it’s with vigour that La villa numeris wished to commit to the France-Romania 2019 season, proposing a double event in France and Romania.

As a place of exchanges and food for thought, as well as a platform for meeting digital entrepreneurs, Villa numeris in Romania is designed as a real accelerator of cooperation between French and Romanian actors. And, we sincerely hope, also a demonstrator of our European digital vision.

As Jean-Jacques Garnier points out, «La villa numeris in Romania will allow French and Romanian actors to get to know each other and to talk to each other, but also to lead reflections in common. I am convinced that it is important that we can exchange views on digital across Europe, in order to develop our competitiveness in relation to other major business basins.»

La villa numeris will host two cultural exchange sessions in two major sectors of the digital environment: Fintech and e-Health, on June 13 at Impact Hub Bucharest. Those interested can take part in the event by filling out this form.

La villa numeris is an independent French think tank promoting a European and human centric vision of the digital industry.

Our mission is to allow decision makers to understand and anticipate social and economic transformations, in order to act accordingly, and to create awareness and mobilisation, giving more meaning to organisations and helping them to succeed in their transformation process.

La villa numeris is an association presided by David Lacombled.

Startup Avalanche, competition organized by Risky Business during Techsylvania, gives out a winning...